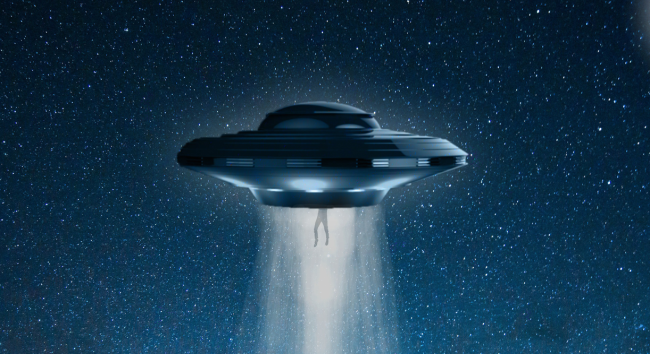 Back in September of 2010, some footage known as the Droitwich alien abduction video made a few small waves in the UFO community, but went mostly unseen and unstudied.

Last year, the Birmingham UFO Group (BUFOG) was able to obtain a copy of the Droitwich abduction video and it was published on the internet by BirminghamLive.

The backstory to the video is that a woman had complained to her husband about experiencing “two abduction experiences in the space of a week.”

Because of this, the couple installed an infrared camera (the husband made security cameras for a living) in the bedroom to see if an abduction would happen again.

It did. Or at least it appears that it did.

About three days after they set up the infrared camera, the woman who is lying in bed underneath the sheets, appears to de-materialize only to reappear back in the same spot 12 and a half minutes later.

Dave Hodrien, the lead investigator at BUFOG, studied the footage and spoke to the woman and deemed it “genuine and not a deliberate hoax.”

This week, former British Ministry of Defense UFO investigator Nick Pope was asked to weigh in on the Droitwich alien abduction video by Birmingham Live.

“I’ve seen this video before and I briefly met the couple concerned, though I haven’t investigated the case personally,” said Pope.

“Frankly, there’s not much middle ground here: it’s either a hoax, or something genuinely spooky and, perhaps, out of this world. Sadly, I’d taken early retirement from the MoD before I saw this video,” he continued.

“If I had the footage while I was working on the UFO desk, and if I also had access to the camera equipment, I could have secured a proper scientific analysis using intelligence community imagery analysis resources and capabilities. That would quickly have told me if the footage was genuine, or had been faked.”

Pope added, “While alien abductions weren’t formally in our terms of reference on the UFO project, you can’t investigate UFOs without finding yourself drawn into the debate about alien abductions. People did contact us about abductions and other so-called alien contact experiences, but I had to tread carefully, because it’s been MoD policy for decades to play down our interest and involvement in the UFO phenomenon.

“So getting too closely involved in abduction research could have caused extreme political embarrassment if it had been found out. I had some ideas though: blood and DNA tests of abductees would have been a good start, in a double-blind study with a control group of people who have no such experiences.

“We could even have tasked the SAS with undertaking covert surveillance of abductees’ houses, dressing the whole thing up as a training exercise. But the risk of exposure was too big.”

Pope hopes that with US Congress and NASA now appearing to take UFOs more seriously, incidents like the Droitwich alien abduction video will be properly investigated in the future.

“Some cases will be hoaxes, some may be the product of vivid dreams and hallucinations, and some may be false memories resulting from regression hypnosis,” Pope said. “But as with UFOs, it only takes one case to be genuine and we’re in game-changing, paradigm-shifting territory.”