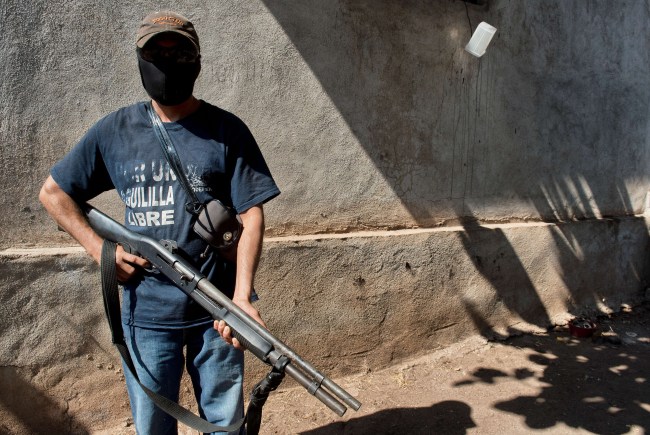 One would imagine that drug cartels wouldn’t be afraid of too many things, right? After all, these are the same people who carry around AK-47s, handguns, and all sorts of other weapons to protect themselves should a random fight break out, or, just so they can enforce their own rules on people when there’s disagreement. Point blank: They’re some of the most ruthless and terrifying people on the planet when they want to be.

But just because groups of drug cartels don’t fear a bullet going through them, they do seem to fear the invisible beast known as COVID-19 — which is spreading across the world at a rapid pace and infecting and/or killing hundreds of thousands of people. Hey, a gun might protect you from a corrupt drug operation, but it can’t kill the coronavirus.

Seeing as how the pandemic is something literally everyone in the world is dealing with right now, Colombian drug cartels are starting to take matters into their own hands — which is something we also saw happen in Mexico. That’s why a few armed groups with ties to cartels in the country are starting to enforce their own rules when it comes to coronavirus lockdowns, going to such extreme measures that they’re actually killing people who break quarantine.

According to the Miami Herald, at least nine people have been murdered for breaking laws that help prevent the spread of COVID-19, per a Human Rights Watch report. In addition to the killings, the report also mentioned that these drug cartels are threatening and/or attacking people breaking lockdowns curfews and other rules.

Per The Miami Herald:

“In communities across Colombia, armed groups have violently enforced their own measures to prevent the spread of Covid-19,” José Miguel Vivanco, Americas director at Human Rights Watch, said in the report released Wednesday. “This abusive social control reflects the government’s long-standing failure to establish a meaningful state presence in remote areas of the country, including to protect at-risk populations.”

The armed groups typically communicate the measures through WhatsApp and pamphlets, ordering movement restrictions, limits on store hours and bans on foreigners and others from going to communities, according to Human Rights Watch.

Another armed group’s pamphlet says, “Those who fail to comply will be held to account under our law with his own life… Either you comply or you die.”

The motive for these drug cartels seems to be obvious: That, once the pandemic is over, citizens in certain rural areas of Colombia don’t report illegal activities like drug trafficking and other corruption the cartels are partaking in because of fear, so it’s obviously a pretty steep enforcement.

So, the next time you complain about having to sit isolated indoors by yourself on lockdown, just think about how the consequence of leaving isn’t quite as bad as some people in Colombia have it. I mean, sheesh, imagine being threatened, attacked or getting shot by drug cartels as punishment for leaving your house. Yeah, that’d probably help stop the virus from spreading real fast.