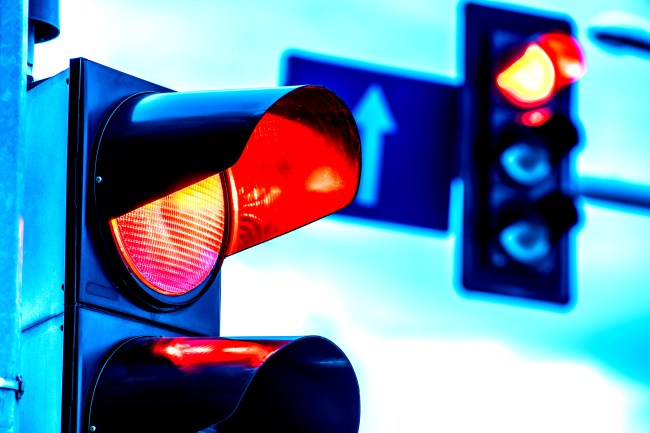 Remarkable traffic-light video just released by the Phoenix police department shows a drunk driver run a red light and just as it was about to collide with a couple pushing a stroller another car comes out of nowhere, T-bones the speeding car, saving the family’s lives..

The incident took place at around 10:10 p.m. on October 14th at a busy intersection in Phoenix, reports Autoblog.

The video shows the couple pushing their one-year-old son in a stroller as cars made lefthand turns in front of them when a Jeep Renegade enters the picture ignoring the red light at a high rate of speed and heading directly towards the family.

Then, just as the Renegade was about to plow over them, a Chevrolet Cruze comes through the intersection, crashing hard into the speeding Jeep and sending it sliding just feet away from the couple and their child.

Police arrested Ernesto Otanez Oveso, 28, and charged him with DUI and aggravated assault, plus unlawful possession of a firearm after they found a gun in his Renegade. He reportedly attempted to flee the scene on foot but was apprehended — but not before pulling a knife on a witness to the crash who was trailing him, according to reports.

The driver of the Cruze, Shannon Vivar, said she was headed home from a Walmart with her mother and 3-year-old son when she heard her mother yell after seeing the Jeep running the red. She suffered minor injuries in the crash. “I kind of think it was meant to happen,” Vivar said in a news conference Thursday.

According to the Arizona Republic, Phoenix has Arizona’s highest rate of pedestrian deaths among cities with populations above 10,000.

Luckily, VERY luckily, on this day three people were spared from being added to the list.