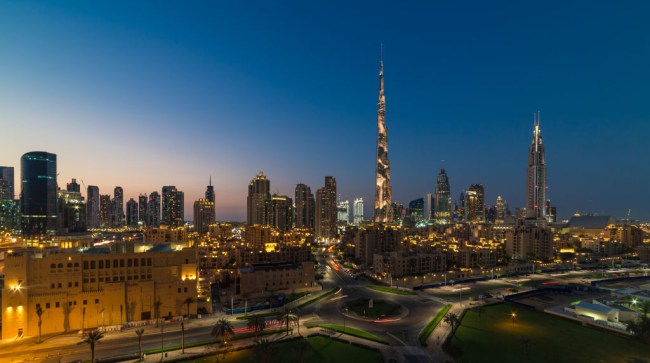 Dubai is a city of opulence and luxury that has been described by at least a few people as “the Las Vegas of the Middle East”— just without the excessive drinking and gambling. It’s a place that has always prided itself on being a worldwide leader in innovation, and they’ve solidified that reputation by doing things like constructing the tallest building on the planet and creating a giant artificial island in the shape of a palm tree.

Now, the largest city in the United Arab Emirates hopes to usher in a new era of transportation via a revolutionary new product: a self-piloting flying taxi drone. The vehicle is produced by a German company called Volocopter and can transport up to two people at a time using its 18 propellers.

Meant to run without remote control guidance and with a maximum flight duration of 30 minutes, it comes with plenty of fail-safes in case of trouble: back-up batteries, rotors and, for a worst case scenario, a couple of parachutes.

Volocopter recently completed a successful test run that was witnessed by Dubai’s Crown Prince Sheikh Hamdan bin Mohammed. As of now, they don’t have a projected date for when the taxis will hit the market, and company co-founder told Reuters “”We only go public when we can show something that flies.”

Volocopter is competing with multiple companies who are eager to be the first to release a similar product— including Airbus, who plans to go to market with their own drone by 2020. Regardless of who wins the race, I’m just glad the future the Jetsons promised us is fast approaching.