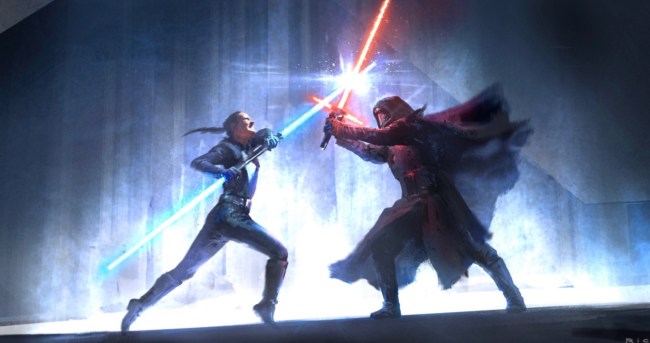 Last week, we brought you the news that Colin Trevorrow’s original script for Star Wars: Episode IX had leaked onto the internet. Trevorrow (Jurassic World) was originally hired to direct the third film in Disney’s Star Wars sequel trilogy but eventually walked away from the project in 2017 due to creative differences.

Trevorrow was apparently relatively deep into the process of developing the film, though, as what has since been confirmed to be a legit script leaked online last week. Titled Star Wars: Duel of the Fates, the difference between what was planned and what we eventually got with The Rise of Skywalker is vast.

The script is full of various reveals, the biggest of which being that Palpatine, while mentioned, is a mere afterthought in comparison to the role he played in The Rise of Skywalker.

Now, just a week after the leak of the script, concept art that appears to match the narrative of Duel of the Fates has leaked online and is equally as impressive as the script itself.

• The Final Battle on Coruscant

You can check out all 20 of the concept art images here.