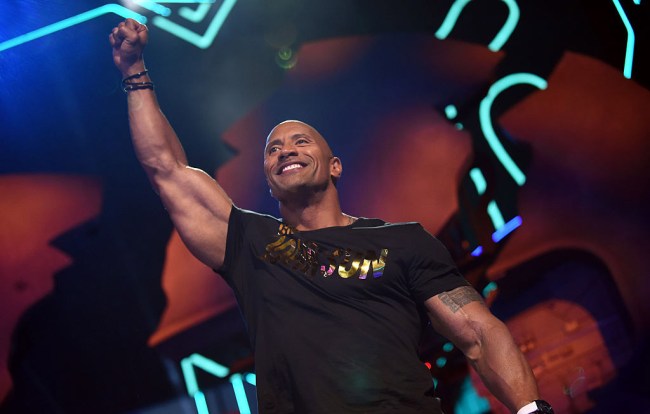 Once again proving (1) there’s nothing he can’t or won’t do, and (2) he is without a doubt the one and only reigning king of the humblebrag, our 46th President of the United States Dwayne “The Rock” Johnson shared a photo to his Instagram account showing him doing something no normal person would even consider.

And that something that The Rock did, all in the name of acting (and humblebragging) was get himself choked out for real on the set of his upcoming movie Skyscraper by stunt man and former UFC fighter Jason “Dooms” Day.

Johnson captioned the photo in his always understated and inspirational fashion…

“The glaze you see over my eyes as Im about to pass out is real. As is how deep this rear naked choke is sunk in by @UFC veteran turned actor/stuntman @jasonwilliamday.

“In our action thriller #SkyscraperMovie I barely survive everything that’s thrown my way. Including this fight. First take when Jason slapped this rear naked on me, I knew right away, holy shit, this brother is sinking it in.

“I thought fuck it, the more real the better, it’ll be great for the movie. After every take Jason would always ask if everything was ok with the choke. I said everything was great.

“Our director, Rawson Thurber called me and Jason over to the monitor to watch playback of the scene. Rawson and Jason were happy and felt we got it, but I said, let’s take one more crack at this.

“Before I walked away I whispered to Rawson, I’m gonna let him hold the choke longer, just keep shooting.

“After the take was done and I got my senses back and SLOWLY got up, me and Jason hugged like grateful gentlemen. He’s a real class act and bad ass. A pleasure getting my hands dirty with a real fighter.”

Unfortunately on August 4, 2011 Day was involved in an accident while riding his bicycle where he was hit by a car tearing the cartilage of his left knee and ankle joints.

Luckily, he won his court case against the driver and was awarded $340,000 in damages and has since found success as a stuntman in Hollywood having done work in such big films as Fifty Shades Darker, Deadpool and now The Rock-helmed Skyscraper.

Here’s what Day calls his last moment in the UFC…

Not a bad comeback, I’d say.