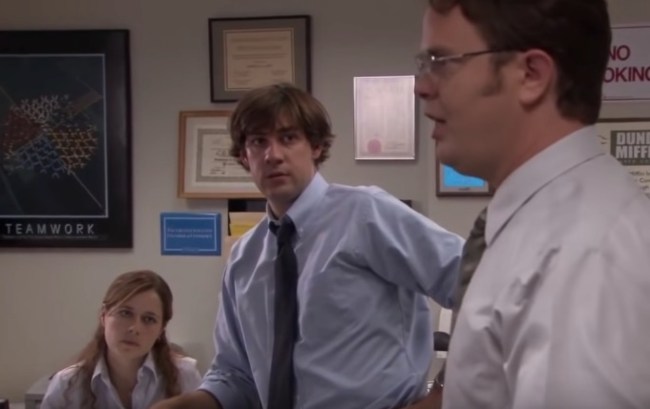 Despite wrapping up nearly six and a half years ago, The Office lives on thanks to being the most binge-watched show on Netflix, constant reruns on Comedy Central, and a very active YouTube channel that continues to produce some excellent supercuts and tribute videos using old footage from the show.

The Office ALSO lives on thanks to the new podcast, Office Ladies, launched by Jenna Fisher and Angela Kinsey who played Pam and Angela on the show. In their most recent episode they had Rainn Wilson (Dwight Schrute) as a guest and they discussed a scene from Season 1, Episode 3 ‘Health Care’ that was mostly improvised.

In the scene, Michael Scott instructs Dwight K. Schrute to pick a new health care plan for the office and everyone has problems with the coverage cutbacks. They’re asked to anonymously submit their health care needs and Dwight Schrute reads them aloud. According to this story, Rainn Wilson and the cast had no idea what would be on the pieces of paper.

One of those diseases written down was ‘Hot Dog Fingers’ and that was the straw that broke the camel’s back. Nobody could stop from laughing and the real reactions of the cast made it into the final cut of the episode.

You can listen to that episode in the podcast streaming link below or read on for the story….

Nicole Gallucci from Mashable breaks it down:

“I remember saying hot dog fingers,” Wilson told Fischer and Kinsey. “They left it in the edit, you guys breaking, you guys cracking over these diseases and it’s truly hysterical.”
Fischer recalled that some of the fake diseases mentioned in the episode were scripted, but for this scene the writers handed Wilson a piece of paper with improvised diseases that none of the other cast members knew Dwight would say.
“None of us knew you were going to say hot dog fingers. It was a complete and utter surprise. That was not in the script,” she said.

“There were some very funny ones that were scripted,” such as “nanorobot micro-invasion or whatever that one was,” Wilson added. The fake disorder he was referring to was actually called “government-created killer nanorobot infection,” and Leslie David Baker (Stanley Hudson) found it so funny that he also visibly burst out laughing in the scene.
“They kept feeding me other ones. It was very hard for me to keep a straight face. I broke all the time,” Wilson said. “You know you get to a certain point in laughing where you just cross a line? Where you’ve just been tickled too much and you just can’t bring it back? That happened maybe every two to three episodes for me and it absolutely happened in this one.” (via Mashable)

Here’s that scene in case you needed a refresher…Not the full scene, just a portion of it:

Where exactly did ‘Hot Dog Fingers’ come from? One of Rainn Wilson’s friends was visiting the set that day and his buddy named Kevin is the one who wrote it on the piece of paper. Perhaps he had some insider information about what would cause Rainn to break character and laugh.

Maybe Rainn has a hotdog thing. Or maybe it was just one of those perfect moments coming together where everyone needed a hearty laugh and couldn’t stop themselves.

If you want to stream that podcast and the link above isn’t working for you then you can click here to head on over to Mashable where they’ve got it embedded in their article.