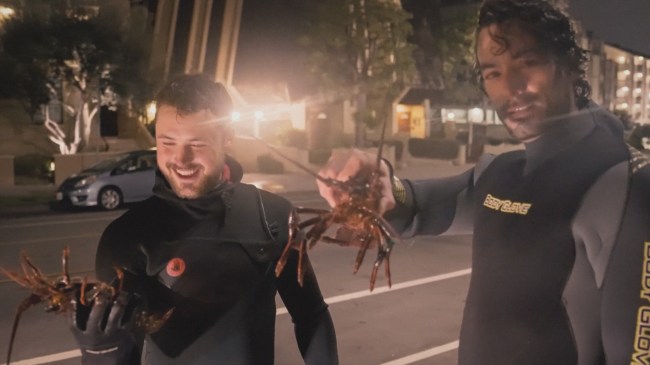 Dylan Efron taps into his spontaneity on the season finale of his show Flow State on YouTube, presented by Firestone Walker. The 29-year-old brother of Zac loves to live in the moment and meets up with Mexican-American actor Aaron Diaz to go late night lobster diving off of the coast of Los Angeles.

Lobster diving is a super niche activity that takes a lot of patience. You can find lobsters anywhere from 15-foot to 60-foot waters and they like to hide out from predators on the rocky coast line in holes and cracks, making for a difficult search. They are found more frequently at night, using the dark to hunt for food, which is why Diaz and Efron begin their evening at 8:30 p.m., despite the freezing cold water.

If you’ve ever watched a Telenovela, that chances are that you know Diaz from one of his many roles. For those who aren’t familiar Diaz, he is quite the adrenaline and travel junkie himself. The two met through a mutual partnership and have been friends ever since, exploring all over the world together.

Efron had gone lobster diving a few times before, but Diaz was a true beginner, but that’s what Flow State is all about. The show is focused on pushing athletes and celebrities beyond their comfort zones and into a “flow state” that Efron defines as an “optimal state of consciousness where one feels and performs at his/her best while being completely being immersed in an activity.” Other guests and adventures include spearfishing with JuJu Smith-Schuester, off-roading with beach volleyball brothers Maddison and Riley McKibbin, rock climbing with XGames skater Leticia Bufoni and speed-flying with a former U.S. Army Ranger.

Episodes move quickly, the production value is great and Efron partnered with a great beer to make it all happen. Firestone Walker’s shared ethos and passion for life made for the perfect opportunity to show case Efron’s love of adventure. When he isn’t working on one of his many projects, he spends a lot of time traveling around the West Coast in his van ‘The Wolf.’ By bringing a few of his friends along for the journey, it makes for a great look at the importance of trying something new and taking a risk. You can watch the full series here.