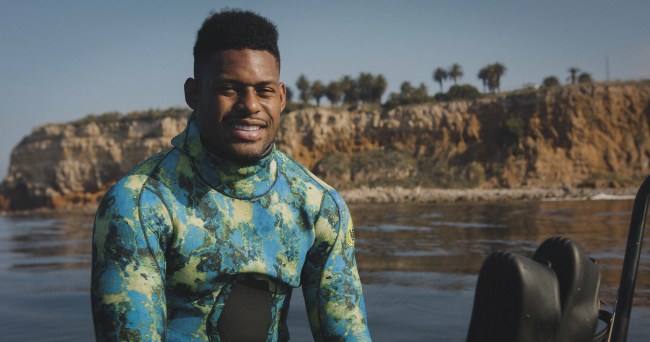 Dyan Efron joined forces with Firestone Walker to present his show Flow State on YouTube and had JuJu Smith-Schuster on the most recent episode. The 24-year-old Steelers receiver met Efron, brother of Zac, at sunrise and went spear fishing off of the coast of Los Angeles— literally right off of the coast, where multimillion-dollar homes sit on a cliff. They joined guide Clark McNulty who showed them the ropes and made for a solid day on the water. Other guests and adventures on the show include off-roading with beach volleyball brothers Maddison and Riley McKibbin, speed-flying with US Army Ranger Pearce Cucchissi, and rock climbing with XGames skater Leticia Bufoni.

Smith-Schuster, as you know, is not one to hold back his personality. He has recently been in the headlines for both his play and his off-field antics, but mostly the latter. Smith-Schuster was very vocal prior to Pittsburgh’s Wild Card game last weekend. The Browns ended up winning in dominant fashion, but the former University of Southern California star had a 13-catch, 157-yard and one-touchdown day in the loss. He also caused quite a bit of ruckus throughout the season with his TikTok dances in pregame. The Steelers had a collapse for the ages down the stretch, but Smith-Schuster averaged 8.6 yards per catch on 97 receptions with nine touchdowns on the year. Solid stat line.

Trying to get my Teammates on Tik Tok 🤣🔥 #fyp #steelers

For someone with a dog named “Boujee,” Efron pushed Smith-Schuster significantly out of his comfort zone and into a perfectly JuJu wetsuit. Once the two got over the seasickness, it was on. Smith-Schuster set a pact with himself that he wouldn’t eat the catch if he finished the day without contributing and hopped in the water. It’s not easy to adjust to the breathing control it takes to dive for dinner, but for as uncomfortable as he looked, Smith-Schuster got a hang of it right away. Both guys got in on some action and the group went back to the docks in Redondo Beach with a successful haul that they were able to turn into some ceviche.

A ‘Flow State’ is an optimal state of consciousness where one feels and performs at his/her best while completely being immersed in an activity and Efron’s life has always reflected his desire to reach that euphoria. The shared ethos with Firestone Walker provided the perfect platform to take other athletes on the journey along with him.

“Dylan’s spirit of adventure and commitment to meaningful experiences and conversations with friends makes him the perfect partner for Firestone Walker. We have had a great time teaming up with him to develop Flow State, an idea that started over a couple of our beers. We are thrilled to see this series come to life,” said Dustin Hinz of Firestone Walker Brewing Company.

Efron has always believed that the best way to make friends is to share an experience and by the end of the long day on the ocean, he and Smith-Schuster are boys for life. All that was missing was a TikTok collaboration.