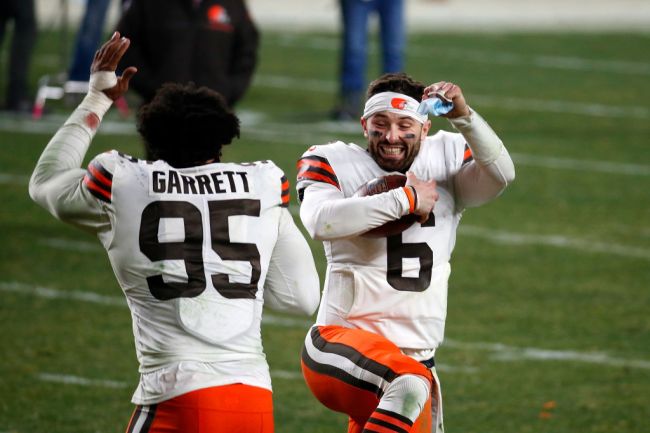 Pittsburgh and Cleveland is one of the most hostile rivalries in professional football, if not all sports. Both teams are constantly taking shots at one another and the games between them are always a little bit nastier. The drama between the AFC North foes reached its pinnacle this season as the two met in the Super Wild Card game on Sunday. After a week without practicing due to COVID-19 concerns, the Browns took the field without five coaches and four players who had tested positive, including head coach Kevin Stefanski.

It didn’t matter who was out, because the Steelers went down 28-0 in the first quarter and could never gain back the ground they lost. Browns quarterback Baker Mayfield completed 21-of-34 passes for 263 yards and three touchdowns without an interception and was thrilled with the 48-37 win. As he was running into the tunnel after the game, he quoted Pittsburgh receiver JuJu Smith-Schuster’s pregame comments and chirped “the Browns is the Browns.”

This saying is in reference to Smith-Schuster’s comments in a press conference earlier in the week where he downplayed the talent of his opponents and called them “nameless gray faces.”

Smith-Schuster had been criticized for his pregame TikTok dances all season and Cleveland cited his routines as fuel for its Week 17 win over Pittsburgh. They trolled him again in the locker room after the playoff win. The Steelers’ 24-year-old superstar receiver was dancing on the field in between plays during the fourth quarter of the loss. He recorded 13 catches for 157 yards and three touchdowns in the loss and really couldn’t have had a better individual night. His quarterback, Ben Rothlisberger, had one of the more bizarre stat lines with 47 completions on 68 attempts for 501 yards, four touchdowns and four interceptions.

There has been a lot of press around Smith-Schuster in Pittsburgh this season and it wouldn’t be a big surprise if the two parties went separate ways. The former USC Trojan was playing as the outside, deep-ball receiving threat when he first got into the league but has been moved inside to the slot as Chase Claypool and Dionte Johnson emerged as serious threats around him. Smith-Schuster recently said that he misses playing on the edges and the Steelers may be as willing to let him be the top receiver elsewhere. There is a lot of time between now and when (if) that train of thinking was to matriculate.

As for Mayfield and the Browns, they won their first playoff game since 1994 and will play the defending Super Bowl champion Kansas City Chiefs next Sunday at 3:05 p.m. EST. The Chiefs will have had 14 days without a game as a team, with many of their starters sitting out since Dec. 27th. If there was a time to catch Patrick Mahomes and the odds-on favorite sleeping, this will be it. Don’t hold your breath, but an underdog story isn’t over until the clock hits zero.