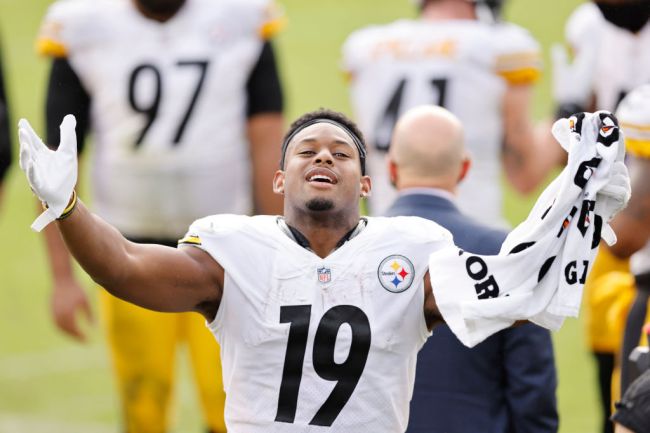 JuJu Smith-Schuster has been at the center of internet controversy this season after he posted TikTok videos of himself dancing on the opposing team’s logo at midfield before each game. The Steelers began the season undefeated through the first 11 games of 2020 but lost three consecutive games in Weeks 13, 14 and 15, and Smith-Schuster’s dances came under scrutiny amidst the skid. Players on the Buffalo Bills and the Cincinnati Bengals both commented on the move, saying that it gave them motivation prior to the game.

On Wednesday, prior to this weekend’s potential division-clinching game against the Colts, Smith-Schuster told reporters that he was going to stop dancing on the logos going forward. He did not post a TikTok on Sunday.

“For the betterment of myself and my teammates, I’m going to stop dancing on the logos,” he said.

The comments came just one day after Pittsburgh head coach Mike Tomlin said he was going to speak with his young receiver about his dancing.

“I am aware of it,” Tomlin said. “And I do plan to talk to JuJu. But we’re professionals. I doubt any of those antics and things of that nature are legitimate motivating factors as you step into professional stadiums. It’s about respect.”

While the pregame ritual came to an end, Smith-Schuster was not dancing. After catching nine passes for 96 yards and a touchdown in a win over Indianapolis, he and his teammates posted a video of them all dancing to the same song in the locker room with the caption “AFC North Champs.”

It was a clear message to the haters and it was well-deserved.