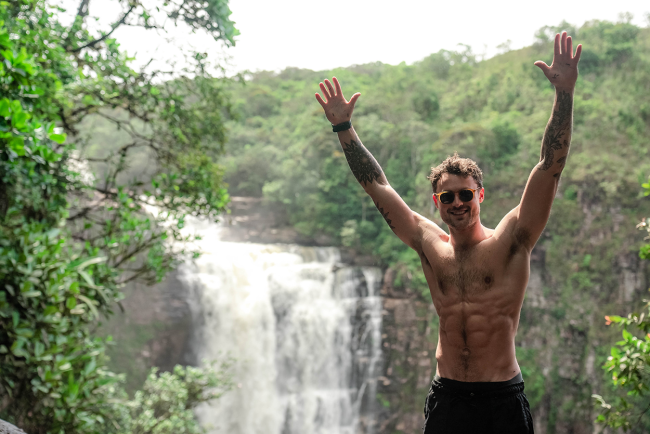 Dylan Efron isn’t interested in the status quo. He wants to always be doing something different, he wants to constantly push boundaries, and he wants to explore new, untapped places.

In other words, Dylan Efron wants to live.

That’s exactly what he does on his new YouTube series ‘Guyana.’ The series takes you across the vast landscape of the relatively unknown country on South America’s North Atlantic coast and the first episode is an incredible look at the vast rainforest.

Rather than telling the story from his own perspective, Efron makes the viewers feel like they’re right there with him. He isn’t your host, but your friend.

As the California-native grew up alongside his brother Zac, Dylan Efron was always finding creative ways to exhaust his never-ending energy.

That is still the case.  He is constantly searching for an activity that challenges him both physically and mentally.

To do so, Efron turned his passion for people and the outdoors into a career. He previously partnered with Firestone Walker for a series called ‘Flow State,’ and now he’s venturing out on his own.

While searching for the perfect place to visit for his next adventure, Efron and his buddies were sitting around the table and landed on Guyana. Very few people are visiting the country as tourists and there is all kinds of untapped adventure that Efron wanted to try and introduce to a whole new audience.

“Most people have no idea what Guyana is,” he said. “I had to look into the country, but once I did, I was immediately drawn to the fact that nobody is going there. It’s a place where nobody that I know of has ever been and I wanted to see something that I couldn’t research online. I had no idea what to expect when we showed up and I think that’s the perfect way to immerse yourself in a new place. It’s everything I look for in adventure”

There are other places in the world, like Machu Picchu for example, that have become so famous that they are almost underwhelming upon arrival. That is not the case with Guyana.

“It’s incredible how unique the experience was,” Efron said. “Unlike Machu Picchu or places that you go to where you’re in a line of a thousand people, we were alone. We were the only people there. There was one guide with us and we didn’t see anybody else, it was just remarkable.”

Efron set out with a goal to destigmatize the unknown while in the country.

People are often afraid to travel to places that aren’t well-established. As the only English-speaking country in South America, Guyana makes it easy.

The Guyanese people, of which there are less than 850,000, are thrilled to see tourists in their country. They want to show you the greatness of how they live, and they want to make you feel at home.

“I’ve traveled to a lot of different places and you can see when people are jaded towards tourists,” Efron said. “You ask questions and they just kinda want you to go away or they don’t want your business there. That’s not the case in Guyana. They’re very curious.”

“They’re honestly more surprised that a tourist decided to travel to Guyana and they want to know what brought you to their country. And I think that creates a sense of camaraderie, rather than a jaded attitude, which is really cool. They’re inviting and helpful, rather than going through the motions.”

In addition to the exposure Efron wants to bring to Guyana, he also wants to speak to the importance of sustainability.

Guyana has one of the biggest rainforests in the world and the money that tourism brings in goes directly toward protecting them.

“So if we can promote tourism to this place, and the indigenous people that are protecting this forest and its resources, it’s just gonna help them and incentivize them to keep protecting rather than trying to find money throughout other areas,” Efron said. “In turn, I think that if I can do a small part of helping the tourism and the digits communities in Guyana, it’s just gonna protect our earth even more. I thought that this project was a perfect merge of this kind of adventure and sustainability brand that I’m falling into and falling in love with.”

While the series itself is not focused on sustainability, there is a huge element of that normative concept interweaved. As the viewer follows Efron and the people he has met along the way into the rainforest, it’s hard not to find an emotion connection with such a vast, awe-inspiring place.

Another important part of the ‘Guyana’ series is the emphasis that Efron put on the audience in terms of stylistic decisions.

As he was filming, Efron wanted his personality to shine through the series as much as the country. To do so, he took his more laid-back approach, inserting himself into the situation only when everything else had been said, whether through the gorgeous landscape or through the kind, caring, passionate people.

“I’m proud of this series because it is my style,” Efron said. “It feels like a lot of the travel shows that watch are similar, and a lot of the hosts are similar, they have a big energy. Everything can be just, I don’t know, the same.”

“I feel like this series in particular is different. It’s my style producing, which is very nature-forward and less blog-like. But then it’s also my hosting style, which is much more casual and laid back, I want the audience to feel like they were there with me. I want them to feel like they’re just… with me on the road.”

Efron wants to be unapologetically himself, and that passion translates really well for the viewer.

“I wanna host my way, I don’t wanna just be that host that’s trying to copy someone else and on a fake voice,” he said. “I just want for the audience to learn along with me and I just want to be authentic.”

A lot of Efron’s authenticity comes to the forefront when he talks about what he wants to get out of the series.

Obviously, Efron hopes that people fall in love with the series and want to travel to Guyana as a result. However, where most people would be excited for the audience to get their eyes on the series, he can’t wait for the people of Guyana to stumble upon the show.

“It’s such a small country, and they have less than a million people that live there,” Efron said. “I think that a lot of people in Guyana might find this series and just be really excited that someone showing their country. I think it’s a place that hasn’t really been represented online and to see their home in this light will be awesome for them. As much as I’m looking for people to learn about this amazing place, I think it’s really cool for the people who’ve known about it to see someone appreciate it for what it is.”

The first episode of ‘Guyana’ with Dylan Efron is live now. In some of the coming episodes, he and his friends go full-send into the desert on horseback with little to no training, get chased by a swarm of African killer bees and get incredibly close to the edge of the largest single drop waterfall in the world.

Check out Dylan’s YouTube Channel HERE and be sure to subscribe so that you don’t miss any of the adventure!