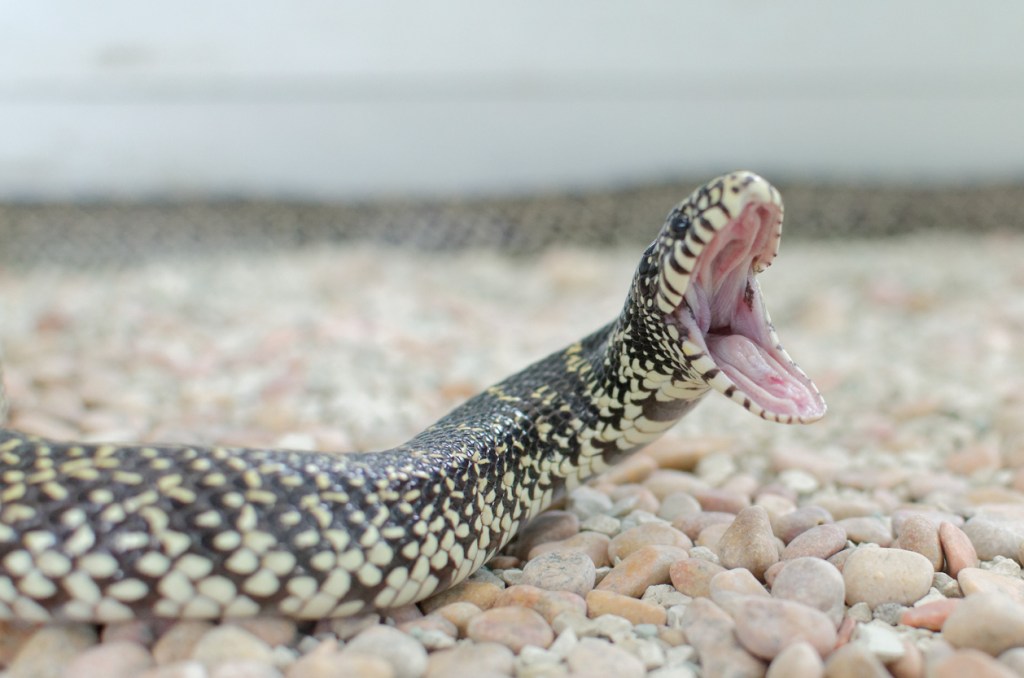 It’s not every day you get to see a large Eastern Kingsnake devouring a massive Timber Rattlesnake but that’s what makes this video so special.

The Eastern Kingsnake is found throughout the entire Southeastern United States and are considered to be ‘large’ and capable of growing to 48 inches in length. They inhabit many of the same places as rattlesnakes. And one of their best defense mechanisms is they are very resistant to the venom of pit vipers which means they can feast on species like the Cottonmouth and Timber Rattlesnake.

According to the video’s description below, this was filmed by Tom Slagle in Haddock, Georgia which is a little northeast of Macon. It shows a large Eastern Kingsnake devouring a much larger Timber Rattlesnake. Check it out:

That video was shared to Facebook by the Wildlife Resources Division – Georgia DNR page and the description reads:

It’s a snake eat snake world out there.
Found throughout Georgia, Kingsnakes are renowned for their ability to overcome and eat venomous snakes. They will strike and grasp prey near the head, coil around it and constrict before swallowing headfirst.
If the snake being eaten is longer than the kingsnake, it will get FOLDED before being swallowed. The more ya know.
Most of the time, you can easily identify this species by the chainlink fence-like pattern on its back. This dorsal pattern is usually white or yellow in color.
Video by Tom Slagle from Haddock, Georgia

The top comment on the video says “And that’s exactly why you don’t kill the good snakes!!” which is certainly an interesting perspective here. I understand the sentiment they’re going for but I guess that also implies that a Timber Rattlesnake isn’t a ‘good snake’ despite also helping keep certain populations in check and being a valuable part of local ecosystems.

These rattlers are found from New Hampshire to Minnesota on down to Texas and North Florida. So there is a large swath of land where the Timber Rattlesnake and Eastern Kingsnake could potentially cross paths.

Everything You’d Ever Want To Know About These Two Species

I’ve eaten rattlesnake before. I’m not sure which subspecies of rattlesnake it was and have no idea if it was a Timber Rattlesnake. It was served to me in tacos at a party and I thought it was shrimp tacos until I took my first bite and then experienced that common ‘tastes like chicken’ moment of when you can’t identify a food.

Not bad though, I’d recommend trying it at least once.

There has been a lot of news in the wide world of SNAKES this week. A team in Florida revealed the largest invasive Burmese python ever found in Florida. Check it out!