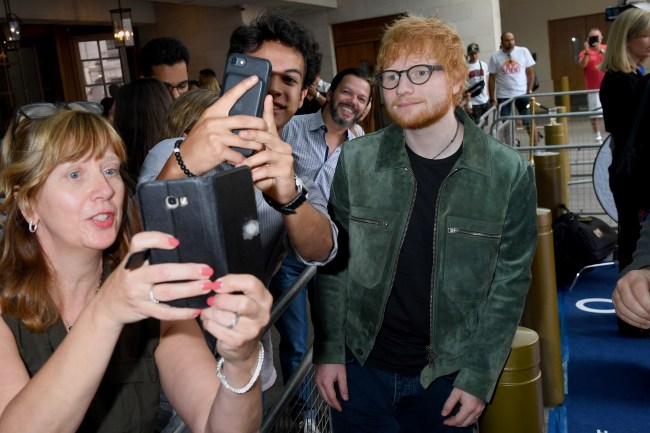 Ed Sheeran has what we call in the industry “fuck you money.” The 28-year-old English singer-songwriter broke a record for ticket sales last year, selling almost 5 million tickets during his world tour to amass more than $432 million over the course of a calendar year. For perspective, that’s about $90 million more than Taylor Swift earned that year, Fox News points out.

Sheeran told Rolling Stone in 2017 that he lost friends when news broke about how much money he made.

“I was getting texts from people with pictures of cars going, ‘I’d like this for my birthday, please. This one’s only .06 percent of your annual income.”

Sheeran said the attention caused him to get rid of his smartphone.

Welp, a new wave of people with their palms out are going to be knocking on Sheeran’s many doors, as it has just been reported that the Grammy winner spent $5 million to purchase two properties next door to his $24.7 million London house because the people next door were complaining about noise from the parties he threw.

“Ed’s had neighbors grumbling about noise before so when he got a chance to buy up the two houses next to his London home, he jumped at the chance,” a source told the Sun.

“Ed has not only made a wise investment but is limiting the chance of people grumbling about loud music or parties. He also decided to buy the flat above his restaurant because that could have been a massive sticking point for the business going forward.”

Sheeran, who is set to become a billionaire by age 30, also bought the apartment above the new restaurant, bar and music venue he owns, just to eliminate the possibility of future noise complaints.

I’m sure Ed could have offered his neighbors $50,000 to stop whining about the noise, but when one tour alone is earning you $500 million, buying up any and all properties in the area is like the rest of us buying a gum ball.

Not bad for a guy who was performing at subway stations before catching a break.