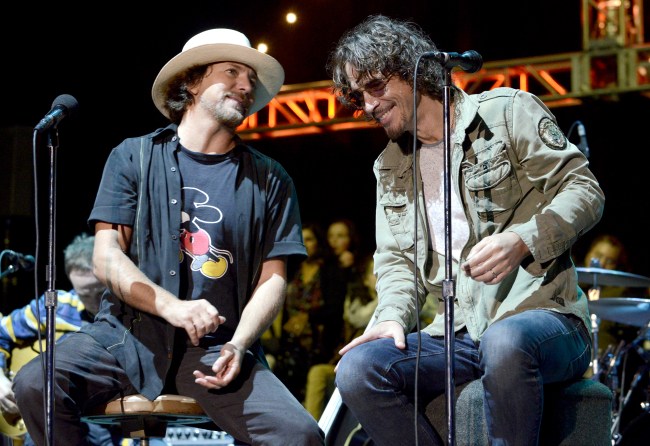 Eddie Vedder and Chris Cornell are two of the most iconic frontmen in rock history, with the former belting out timeless songs for Pearl Jam and the latter best-known for his vocal range for bands like Soundgarden and Audioslave, among others. With both shaping the popular grunge scene in Seattle during the ’90s, Vedder and Cornell often collaborated, most-notably with the group Temple of the Dog, with the two developing a longstanding friendship.

Tragically, Cornell took his own life in the May of 2017, which absolutely shocked the music industry. On a more personal level, as somebody who currently lives in Seattle, that was a tough day. Since moving to the city in 2013, I’ve built friendships with people who are best friends with Pearl Jam members Mike McCready and Stone Gossard, so Cornell’s suicide felt close. It’s something that still seems to hold a dark cloud on people — one of which is Eddie Vedder.

Appearing on the Howard Stern Show, Vedder talked about how, even 3.5 years later, he still hasn’t fully accepted Cornell’s death. In fact, he claims he’s still in denial, and described his unique friendship with his fellow rockstar legend.

“I’ve had to be somewhat in denial,” Vedder said. “I don’t even feel like I had a choice. I was just terrified where I would go if I allowed myself to feel what I needed to feel or what I was instinctively wanting to feel or how dark I felt like I was gonna go.

“And because I didn’t see him that often in the last 10 years – probably only, like, four or five times, and usually at a gig or something – I still haven’t quite dealt with it. I’ll get stronger as time goes.”

“I would hang out with him outside of the band more than even the other band guys, and I didn’t know that many people in Seattle. So we would go on crazy hiking adventures, or we would go mountain biking, or we would chase the dog in the rain while drinking shitty beer — and it was cool.”

The entire interview with Stern shows an extremely candid side of Eddie Vedder, with the Pearl Jam frontman adding how Cornell’s death “took me down so hard,” with him admitting that he was terrified about going down a dark path himself during the grieving process. Even after three years, it’s clear the suicide of his good buddy hits hard.

Chris Cornell’s suicide shocked the music industry, but his legacy still carries on today. His daughter, Lily Cornell Silver, has a web series called Mind Wide Open, which brings awareness to mental health issues, hoping to help others who struggle with some of the same issues her dad did.