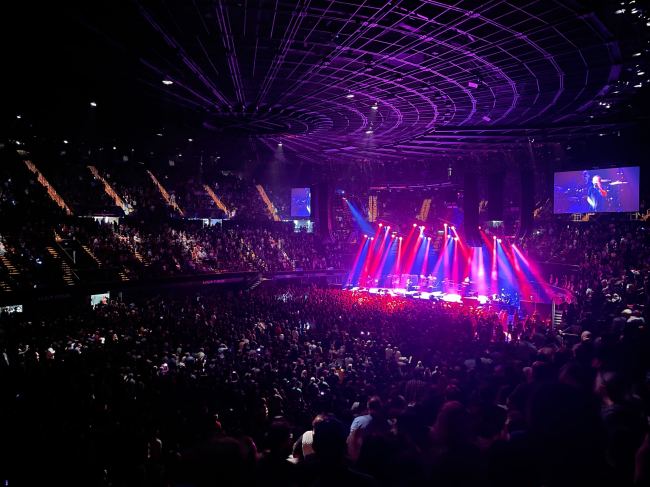 Pearl Jam just kicked off their 2022 North American tour with a string of shows on the west coast. The tour includes a two-night run at The Forum in Los Angeles, originally scheduled for April 2020.

During the first night at The Forum, Eddie Vedder launched into a story about the history of the venue, currently featured front-and-center in HBO’s Winning Time series about the 1980s Los Angeles Lakers dynasty.

After performing “Corduroy”, Vedder told the sold-out crowd: “We’re not just anywhere. We’re in the Fabulous Forum. It is fabulous. There are nice buildings, historic buildings in this country. Madison Square Garden, Boston Garden, Chicago Stadium. Some of these are no longer there….”

While holding a bottle of wine, Vedder continues…

“The history in this building, whether it was The Who or Led Zepplin. Or The Lakers or Muhammed Ali. Michael Jordan, Kareem Abdul-Jabbar, Magic Johnson, Jerry West, and Jerry Buss…”

“And Pink Floyd. Pinky Floyd told the record company they were going to do a coast-to-coast tour of the United States for the album called The Wall. Which they did. They played New York, Chicago, and Los Angeles…”

“I drove up from San Diego. It was me and my friend, who was a drummer. We had tickets. I gave him the money, he bought the tickets. We were out there in the parking lot,” Vedder explains.

“When I pull up today, I still get nervous in the parking lot. Because it was sitting in the parking lot, rolling… something (joints), illegally back then. Dangerous for a 14-year-old… But we were just perfecting the craft. Which, in later age, serves us well.

“But we were a little nervous about going in, I just wanted to go in. I want to get to my f*cking seat because Pink Floyd is about to play the f*cking wall. He goes into his ashtray to pull out the envelope of tickets, but… he didn’t bring the tickets.”

“The show starts in 15 minutes and he didn’t bring the tickets. He’s got money enough to buy one to get in.”

Eddie finishes, before taking a swig of wine.

“And I sat in the parking lot the entire Pink Floyd show.”

“But that’s the story. There’s no happy ending! Actually, there is a happy ending. I’m here now.”

Poor Eddie. What a blunder. Such a bummer to miss Pink Floyd’s The Wall because your buddy forgot the tickets. But it happens! Fortunately, these days, most tickets are on your phone, so the mishap is a little harder.

The three-hour Pearl Jam show, by the way, was spectacular. If you get a chance to see them this run, don’t miss it.

Here’s a video of Eddie’s story: