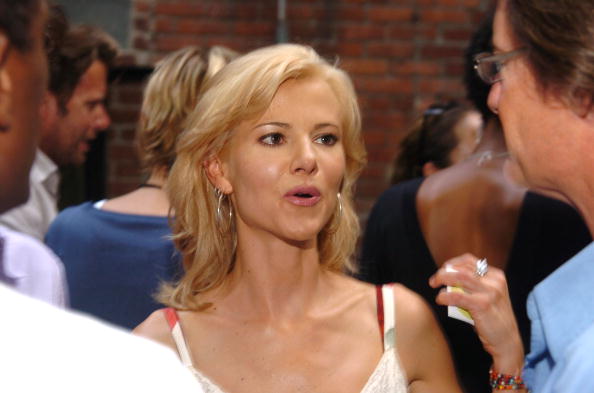 This headline is not a word salad, a Mad Libs sentence or something from Cards Against Humanity. This is an actual event that happened in real life. There are legitimate sexts from El Chapo’s lawyer to a person known as the “Vegan Bernie Madoff,” who allegedly got an STD from comedian Louis CK. Buckle in kids, this one needs some explaining.

The attractive woman seen in the photo above is Sarma Melngailis and she was the owner and co-founder of Pure Food and Wine, a vegan raw food restaurant in New York City. Melngailis was wanted by authorities for stealing nearly $2 million from her restaurant and investors. Melngailis went on the lam for 10 months with her then-husband and co-conspirator, Anthony Strangis.

They both were arrested in May of 2016 after Strangis ordered Dominos pizza and chicken wings to their $99-a-night hotel in Tennesse. Not very raw or vegan of them. The couple spent the stolen money on Rolexes, European vacations, and Strangis’ gambling habit.

Lichtman was able to score a sweet plea deal for Melngailis and knocked off more than 14 years off her original sentence. On May 10, 2017, Sarma pleaded guilty to charges of grand larceny, criminal tax fraud, and a scheme to defraud and was sentenced to only four months in prison. Sarma, a woman who built an empire on being a vegan, admits she ate chicken twice a week while serving her sentence at Rikers Island.

Lichtman, 53, was serving the legal needs of Melngailis, 46, but he was also serving her physical and romantic needs as well. The New York Post acquired hundreds of sexts from the professional and amorous relationship that spanned from February of 2017 until May of 2018.

Two days after the Sarma’s sentencing, Lichtman texted Melngailis: “Do you want to belong to me? Will it be ok if some days I just use your body so that I can [orgasm]?” Melngailis blamed Strangis for getting them caught by police in Tennessee because he ordered the pizza and wings from Dominos. She filed for divorce from her ex-con husband in May of 2018.

On May 19, 2017, Sarma asked Lichtman if he was married and he told her, “Separated since December.” However, Lichtman is married and has twin teenage boys and when the New York Post reached out to his wife she said she knew nothing of the affair and that she and her husband had never separated.

On March 18, 2017, Lichtman texted his client: “You do look so pretty in that pic I would like to foul you. Is it bad that I’m thinking some disgusting thoughts about you?” Melngailis replied: “Is it bad that Iʼm glad youʼre thinking them?”

Nine days later, Lichtman texted Melngailis: “We need to do this soon, would you still be able to stand me as your lawyer if I foul you?” Melngailis answered, “I think so.” Lichtman replied, “Let’s wait until after then.” Sarma responded, “I’m not opposed to before,” the former restaurateur said.

Eight days before the plea deal was done, the client and lawyer had an affair. “I loved being in you,” he wrote to Sarma. “And see how you lucked out: I didn’t go all praying mantis and kill and eat you after,” Sarma responded. For that would have only been self-defeating.” Three days later, Lichtman asked, “Do you want that again?” She replied, “Yes I do.”

The two discussed having sex on Ambien and wanting to touch each other in court. One sext message from Sarma to her lawyer said, “Penciling in ‘Jeffrey’s c*ck’ in my calendar for Thursday pm. I do.” She went on to explain how a vegan diet high in fruit (especially pineapple) will make certain bodily fluids taste better. FYI: That theory has been said to have minimal effect on your secretions and no amount of pineapples will make your bodily fluids taste like a pina colada.

Lichtman was paying extra special attention to the scamming restauranteur’s case, saying, he was “in touch 24 hours a day and spending more time on your case than on the one where I got paid a million dollars.”

In a text from March 16, 2017, Lichtman tells Sarma about his current client, El Chapo. “Is it bad that I’m hiring a belly dancer to be Chapo’s daily visitor? He has no pretty women visiting him. I feel bad,” Lichtman wrote.

Lichtman told The Post: “This is a deeply personal matter that I’m going to try to deal with privately. My life and behavior have not always been perfect — as I think we can all say — but I’m proud of my legal work in this case and on behalf of all the clients I’ve represented for the past 28 years. My personal feelings have never impacted my professional work or the results that I have achieved.”

Melngailis, whose restaurant in Gramercy had ​celebrity eaters such as Woody Harrelson and Alec Baldwin, also appears to have had a romantic relationship with Louis C.K. An email from the comedian to restauranteur from March of 2012: “My brain has thoughts about you in it. Somewhere between 27 and 93 ¹/₂.”

However, things took a turn for the worse when the raw food specialist reportedly accused Louis CK of giving her an STD. An “upset and freaked out” Sarma emailed the comedian on June 17, 2012, claiming that Louis C.K. gave her a sexually transmitted disease.

Louis C.K. allegedly responded: “Hey. I understand you’re upset. This kind of sh*t is tough. I never swore that I was clean. I told you I may or may not have given this to you. I’m sorry if I did. If you gave it to me, it’s okay. We all share the current human bloodstream, which includes this kind of stuff.”

“I should have worn a condom, you should have made me, we should have a lot of things. we are human,” Louis C.K. is said to have written. “Our generation has this stuff. The next generation will all be inoculated and will have sex with electric glass penises and digital vaginas and they’ll get software viruses instead. It’s part of life.”

“I’ve been told the same thing, that there’s no good tests for guys and even that condoms don’t stop sh*t,” the stand-up comedian said in an email to Sarma according to the New York Post. “I don’t know. It’s a mess. I hope you’re okay. I think you will be. And I am sorry. I still look back tenderly and happily on our time together. And that night. It was really wonderful, even though it never happened again and it seemed to be sort of a stopping point for us, unfortunately.”

So that allegedly happened.