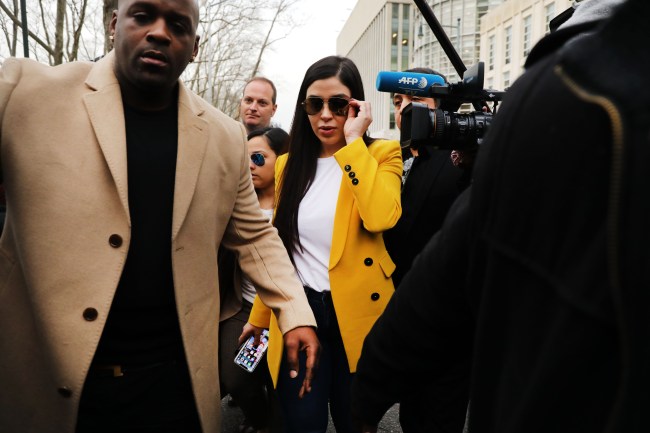 Earlier this week, Emma Coronel Aispuro, the wife of convicted drug kingpin Joaquin “El Chapo” Guzman Loera, was arrested on charges of international drug trafficking and conspiring to assist her husband in his 2015 escape from prison. According to various reports, Aispuro, who turned herself into authorities, may be getting ready to talk about the Cartel’s secrets in exchange for witness protection for her and her kids.

The NY Post spoke with a federal law enforcement source who claims Aispuro is “definitely cooperating” with authorities and will ‘rat out high-ranking members of the Sinaloa cartel.”.

As she prepares to rat out high-ranking members of the Sinaloa cartel, including her own stepsons, Coronel Aispuro was forced into a more sober look in drab prison greens, her pouty lips free of red lipstick.

“Emma wants to get far away from the violence, and has always wanted to live in the US,” said the source. She was born in California and has dual US/Mexican citizenship

“She already had her defense attorney lined up before she got on a plane to turn herself in,” the source told The Post. “Her number one priority is to protect her kids and remain in the US.”

Apparently, prosecutors in the case will be more than happy to give Aispuro a new life in witness protection if she gives them solid information on the cartel.

Emma Coronel Aispuro would vanish with her nine-year-old twin daughters despite currently facing up to 40 years in prison over drug conspiracy charges if she accepts the deal.

Her jailed cartel boss husband Joaquin ‘El Chapo’ Guzman will even encourage her to cooperate as an act of revenge on those who crossed him, ex-top drug officer Mike Vigil told DailyMail.com.

Vigil, who spent years undercover infiltrating Mexican and Colombian cartels, is convinced she will take the deal.

The legendary DEA crime buster, who maintains close law enforcement contacts, said: ‘Prosecutors will dangle witness protection in front of Emma Coronel. That is without question.

‘She will be more than tempted by the chance of an anonymous new life. I believe she will cooperate.’

Since the arrest of her husband back in 2016, Emma has starred in a VH1 reality show called “Cartel Crew” and has amassed over 600k followers on Instagram where she regularly flaunted her extravagant lifestyle to the public.