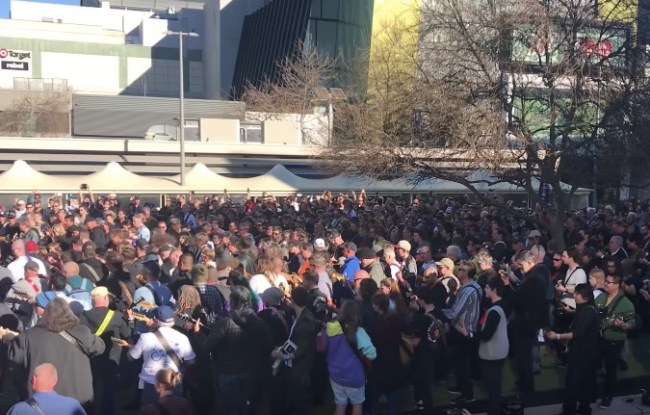 I’m a simple man. I see an article about a cool world record being sent and I click it. Sometimes the world record attempts disappoint but as is the case below, sometimes they deliver.

The previous world record for ‘most guitarists playing the same song at once’ stood at 368. This was set in India back in 2013 when hundreds of guitarists played along to ‘Knocking on Heaven’s Door’ by Guns N’ Roses.

Flash forward to last weekend at the Sydney Guitar Festival and we’ve got a new record. Well, a new *pending* record. It will take a few weeks for this one to be officially certified.

If you’ve ever wondered to yourself ‘I wonder what it sounds like when a shit ton of electric guitars play the same song at once?’ then wonder no more.

A total of 457 guitarists plugged into mini-Marshall amps and all played along to AC/DC’s ‘Highway to Hell’.

I’ll be honest and say that I totally expected this to sound like shit so I was pleasantly surprised by the finished product. I’d assumed some guitarists would be off and there’d be an awful cacophony of botched notes but I guess we’re working with a bunch of guitarists who can actually keep rhythm.

I love the song choice here.

You’ve got 457 guitarists in Australia trying to set the new world record, why not go with AC/DC? They’re arguably the most famous rock-and-roll band from Australia, so this actually works out as a pretty nice homage to the band.

According to Mashable, even though this record beat the 2013 record set in India by 89 guitarists it can still take up to six weeks for a new world record to be certified by Guinness World Records.

This is somewhat baffling because it seems like there’s a full week every year when Guinness officials are on the TODAY Show certifying new records every day. And it’s clear that they can certify records on the spot. So I don’t fully understand why it’d take them up to 6 weeks to certify something like this but then again I don’t really have a good concept of what they do every day.

According to festival spokeswoman Tatiana Marchant, even though the guitarists were using tiny Marshall amplifiers they were still able to pump out a ton of sound collectively. This brings me to my next thought, how do they plan for plugging in that many mini-amps?

Is everyone told to bring a portable battery and plug into that? Is someone tasked with bringing 150 power strips to plug into available outlets? Are there extension cables running in every direction?