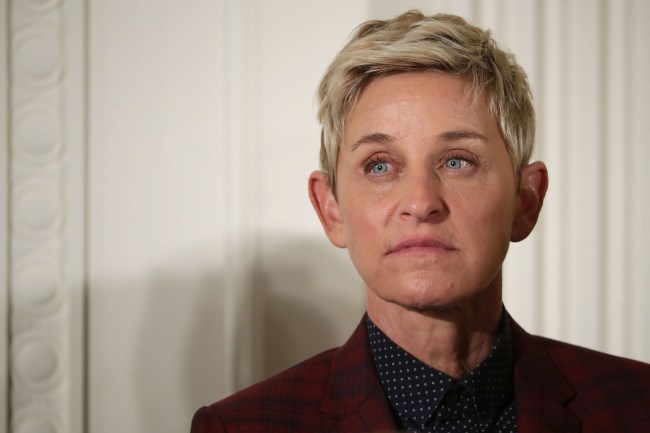 The Ellen show could be coming to an end.

For the past month, Ellen Degeneres has been under fire due to allegations of a “toxic” workplace culture at the show from staffers.

Things got worse on Thursday when a dozen staff members came forward with allegations of sexual misconduct, harassment, and assault while working on the show.

NEW: Dozens of men and women who work for The Ellen DeGeneres Show say sexual harassment and misconduct by executive producers runs rampant behind the scenes https://t.co/0xc2eGvdV3

According to a new report from the Daily Mail, Ellen has been in talks with executives from Warner Bros. and Telepictures, the company that produces the show to end her daytime talk show because she feels it’s the only way for her to recover her personal brand.

“She feels she can’t go on and the only way to recover her personal brand from this is to shut down the show,” an insider told the outlet on Friday. “The truth is she knew what was going on — it’s her show. The buck stops with her. She can blame every executive under the sun — but Ellen is ultimately the one to blame.”

On Thursday, Ellen sent a memo to her staff apologizing for what went on behind the scenes

“On day one of our show, I told everyone in our first meeting that ‘The Ellen DeGeneres Show’ would be a place of happiness – no one would ever raise their voice, and everyone would be treated with respect,” she began. “Obviously, something changed, and I am disappointed to learn that this has not been the case. And for that, I am sorry. Anyone who knows me knows it’s the opposite of what I believe and what I hoped for our show.”

As we’ve grown exponentially, I’ve not been able to stay on top of everything and relied on others to do their jobs as they knew I’d want them done. Clearly some didn’t,” she said. “That will now change and I’m committed to ensuring this does not happen again.”