Try As He May, Elon Musk Cannot Be Less Funny Than Steven Seagal 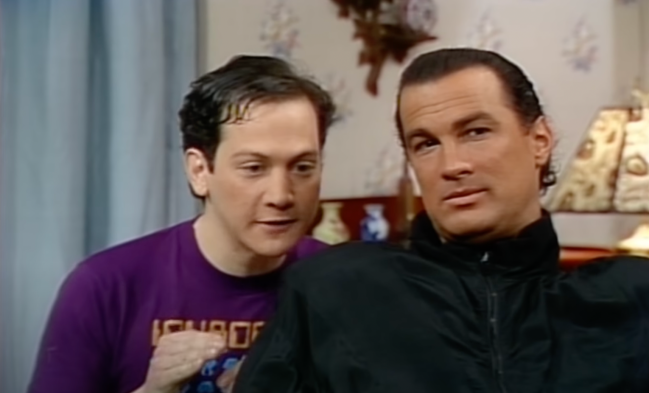 Before we get too far over the handlebars with Anti-Musk Mania, let us collectively find comfort in the fact that Elon Musk is not Steven Seagal, who is widely considered to be the most agonizing host in the show’s 45-year history.

On April 20, 1991, fresh off the glow Hard to Kill and Marked for Death, Seagal hosted an episode of Saturday Night Live that Lorne Michaels ultimately removed from rerun rotation and banned the actor from returning.

One of my favorite YouTube comments from the video below:

“Steven Seagal – the only man in history that could prevent Chris Farley from getting a laugh.”

David Spade revealed in the book Live From New York: The Complete, Uncensored History of Saturday Night Live that Seagal’s stubbornness and unwillingness to be in on the joke caused the suits at NBC to consider “replacing the host and just doing a cast show.”

Former cast member Julia Sweeney once claimed that Seagal brought in his own sketch ideas, and if aired today, one of them would earn him a one-way ticket to Cancel Town U.S.A.

“Some of his sketch ideas were so heinous, so hilariously awful, it was like we were on Candid Camera.”

One pitch in particular left Sweeney dumbfounded: “He had this idea that he’s a therapist, and he wanted Victoria Jackson to be his patient who’d just been raped. And the therapist says, ‘You’re going to have to come to me twice a week for like three years,’ because, he said, ‘That’s how therapists fucking are. They’re just trying to get your money.’ And then he says the psychiatrist tries to have sex with her.” [via Ultimate Classic Rock]

And we lambasted Elon for this!!

Here is Dana Carvey telling Stern in May 2019 that the writers had to re-write a sketch because Seagal literally did not understand the concept of a joke.

“The biggest problem with Steven Seagal was that he would complain about jokes that he didn’t get, so it was like — you can’t explain something to somebody in German if they don’t speak German. He just wasn’t funny, and he was very critical of the cast and writing staff. He didn’t realize that you can’t tell somebody they’re stupid on Wednesday and expect them to continue writing for you on Saturday.”

SNL getting in more digs at Steven Seagal during the Jackie Chan episode. thought of this clip since @ThatWeekInSNL are covering the Seagal episode this week pic.twitter.com/oW0PRGtFsJ

Musk will take the stage nearly 30 years to the day from Seagal, and if the Content Gods gift us anywhere close to the tithe we received from Seagal’s self-immolation, I’d consider it one giant leap for mankind.