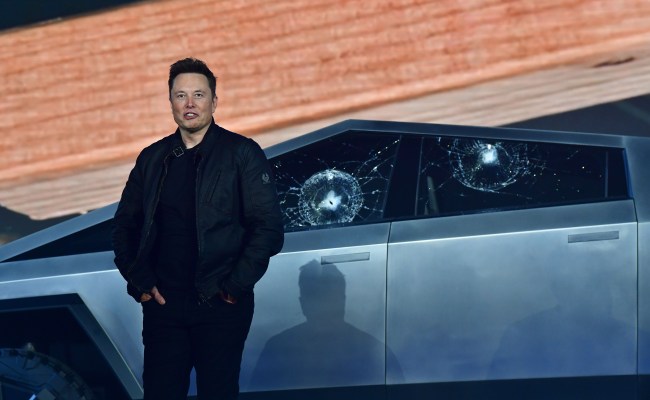 Elon Musk unveiled the Tesla Cybertruck over the past weekend to really mixed reviews. It seemed like everyone on Twitter was skewering the Cybertruck for looking like some sort of unfinished rendering of what the future should look like.

Then there was the unveiling itself where Elon Musk accidentally broke the Cybertruck’s window during a demonstration claiming it is bulletproof. But that didn’t stop more than 200,000 people from reportedly putting up a $100 refundable deposit to pre-order the Tesla Cybertruck.

On Sunday night, Elon Musk tweeted this video of a ‘tug-of-war test’ between the Tesla Cybertruck and a Ford F-150 which appears to show the Cybertruck straight up dominating the F-150.

This is supposed to be a display of performance and we’re led to believe the Cybertruck is a vastly superior option to America’s most popular truck. But people were quick to point out that it likely isn’t apples-to-apples here and the test is quite possibly misleading.

The website Motor1 broke down the differences. Essentially, what we’re seeing is here a heavier all-wheel-drive Tesla Cybertruck square off against a lighter rear-wheel-drive F-150 and that’s all that matters in a test such as this:

Simply put, the F-150 used in this video is noticeably lighter, cheaper, and probably significantly underpowered compared to its all-electric opponent – and in tug of war competitions, it’s the engine output and weight of the vehicle that basically decide the winner. Also, the Cybertruck appears to be the one taking the slack and building forward momentum before the F-150 starts doing anything. Add to that the lack of an AWD system on the F-150 and a locking rear differential, plus the instant torque of the Cybertruck due to its all-electric powertrain. (via)

People were quick to hit up Elon Musk on Twitter about the apparent disparities in the tug-of-war test and Elon was equally as quick to respond with news that they’d perform another test as soon as next week. This is Elon’s response to Sunny Madra who is in charge of Ford X which is Ford’s ‘mobility ventures lab’.

Sure, will aim to do this next week

We all love Torque. But high Torque just spins a tire in place if there’s not enough weight to provide traction. Fully load the F150, giving highest traction to its rear wheels, then try to drag that up the hill. I otherwise agree: Load both to the max and the highest torque wins

Electric motors also have insane torque. If we load both trucks to the max, electric still wins. Physics is the law, everything else is a recommendation.

It looks like this rematch is coming very soon. Business Insider was quick to point out that this was the first time an executive from Ford Motors has publicly discussed the Tesla electric truck but I have to imagine they’ve had countless meetings about this behind closed doors.

Ford debuted an electric F-150 earlier this year which was capable of pulling 1 million pounds of train cars (for only 1,000 feet) so they’re pretty confident in their electric truck.

Furthermore, I can’t help but feel like Elon Musk is walking into a bit of a trap with this forthcoming tug-of-war apples-to-apples test and that’s why Ford pounced on this. So part of me suspects this battle to be indefinitely postponed after they do some simulated tests behind closed doors.