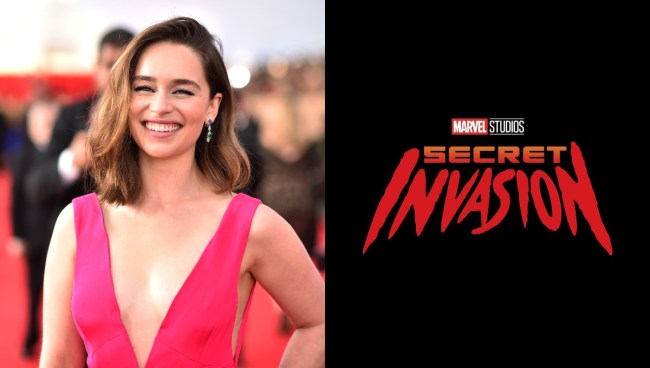 Ever since Emilia Clarke was cast in the upcoming Disney+ series Secret Invasion, Marvel Cinematic Universe fans have been speculating that the Game of Thrones alum will be playing Jessica Drew, a.k.a. Spider-Woman.

The basic plot of Secret Invasion, at least in the comics, is that the shapeshifting alien race known as Skrulls infiltrate the highest levels of human society by assuming the identities of various superheroes and government agents, such as S.H.I.E.L.D. operative Jessica Drew.

Are we going to see Emilia Clarke play spider-woman?! PLEASE I WANT IT pic.twitter.com/e8bJ5qQkw8

Recent comments made by Clarke have only added fuel to that fire, as the Emmy-nominated actress name-checked her love of Spider-Man specifically:

“I grew up reading fantasy fiction, so I know that’s not the same as the actual comic book itself, but that was where my imagination lived,” Clarke revealed. “And so, then reading about superheroes for the first time, I’m pretty sure it was Superman that was my first ever. And Spider-Man, I kind of thought he was pretty cool. Spider-Man was the first origin story that I remember as a child reading and being like, Oh wow, this is more than what’s on the page. This is a bigger world,’ and then being allowed into that.” [via Comic Book]

At this time, Secret Invasion — one of many Marvel Cinematic Universe series scheduled for the next few years — is set to hit Disney+ sometime in 2022. In addition to Secret Invasion, series such as Loki, What If…?, Hawkeye, Ms. Marvel, Moon Knight, Ironheart, Armor Wars and She-Hulk will be making their way to D+ in the coming months and years.