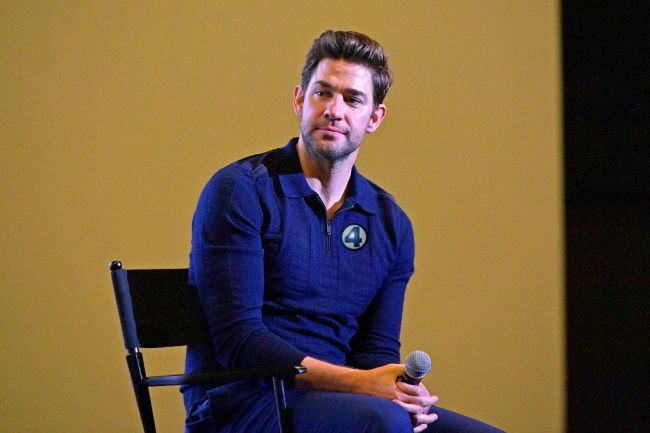 Unlike his lovely wife Emily Blunt, who’s been quite vocal about the fact that superhero movies aren’t up her alley, A Quiet Place director and former The Office star John Krasinski has been rather honest about his desire to play Reed Richards, a.k.a Mr. Fantastic, a.k.a. the head of Marvel’s First Family.

“I would love it,” Krasinski said when asked about being cast in the role back in February 2020.

A month later, he doubled down on those comments, not only saying that he’d “love to do” Fantastic Four, but that he’d also be open to directing it.

Now, fast forward to today — with Hollywood and the movie world well and truly back in business — and Krasinski is speaking on the topic again.  In a recent interview with Uproxx — which was actually an old interview with Uproxx done in March 2020 right before, you know… — Krasinski once again spoke about his genuine interest in the role.

“I actually felt stupid,” Krasinski said when asked about his vocalness and openness about being cast as Mr. Fantastic.

“I wanted to email Kevin Feige and be like, ‘Sorry, man. I wasn’t trying to like put pressure on you. You’re the man.’ I think I felt, it’s like I was trying to sometimes over calculate how much I’ve talked about certain things. And then you get older and you just go, ‘I don’t know, I’m going to be honest.’ And my honest answer was like, ‘Hell yeah. I’d play Mr. Fantastic.'”

“And then people were like, ‘Oh my God.’ And I didn’t know it would be headlines. I thought it would just be the eighth question in that interview. But it’s true.”

Marvel Studios is nothing if not smart. If Krasinski is open to the role, and fans want him in the role, odds are they’ll kick the tires on such marriage, if they haven’t already.

While Disney has yet to confirm when Fantastic Four while release, the press email that accompanied a recently release sizzle reel categorized the film as a Phase 4 release. That same sizzle reel dated every Phase 4 film, all the way up to Guardians of the Galaxy Vol 3. on May 5, 2023, which would suggest, perhaps, that Fantastic Four will hit theaters in either late Summer or Fall 2023.

RELATED: Emily Blunt Took A Big Steaming Deuce On The Idea Of Being Cast In ‘Fantastic Four’