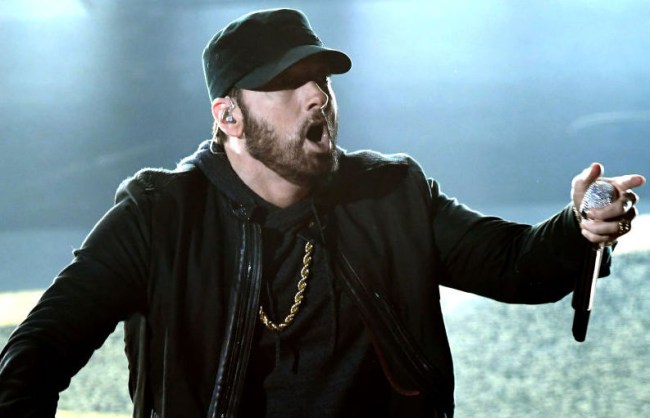 There have been a number of musicians over the years who have incited a moral panic for a variety of reasons that are hilarious in hindsight, like when Elvis Presley scandalized the world by moving his hips around and various rock bands horrified parents by supposedly trying to corrupt their children by hiding Satanic messages in their songs.

Around the turn of the millennium, a new artist burst onto the scene who also managed to whip upholders of decency into a frenzy, but compared to the aforementioned examples, I would argue those people were fairly justified when it came to objecting to the various antics of Eminem.

Rap had already been the target of an onslaught of criticism prior to the arrival of Marshall Mathers to a point where Congress held hearings concerning the genre’s obscene lyrics and the promotion of violence. It’s safe to say Eminem didn’t do much to assuage those concerns with the release of The Slim Shady LP, an album featuring a song where he recruits the help of his infant daughter to get rid of his wife’s dead body after he presumably murdered her.

In the coming years, the rapper’s lyrics led to him being called homophobic, sexist, misogynistic, and every other negative label in the book, but eventually, he became hip-hop’s version of South Park in the sense that people realized nothing they did or said was going to stop him from being who he was.

Last week marked the 20th anniversary of The Marshall Mathers LP, and to celebrate, Em participated in a virtual listening party where he answered a wide variety of questions from fans, including who he wants to collaborate with but hasn’t yet (Andre 3000), his favorite Batman actor (Christian Bale), and what inspired the infamous song “FACK” (drugs).

At one point during the chat, someone inquired about his favorite cereal, to which he replied…Raisin Bran Crunch.

Over the course of his career, Eminem has talked about stapling his teacher’s testicles to a stack of papers, putting a gerbil up his butt, and sympathized with Chris Brown over the Rihanna situation. However, I’m not sure if anything he’s said is more outrageous than saying his favorite cereal is something a 57-year-old turns to when they want to increase their daily fiber intake while still getting to treat themselves a bit with some sweet granola morsels.

I’m not necessarily saying Raisin Bran Crunch is a bad cereal, and even if we’re ignoring the sugar-filled treats we enjoyed in our youth, are you really going to go with that over Frosted Mini-Wheats or Special K Red Berries if you’re trying to be healthy?

I didn’t need any more evidence to know Eminem is out of his mind but this just cements how crazy he really is.