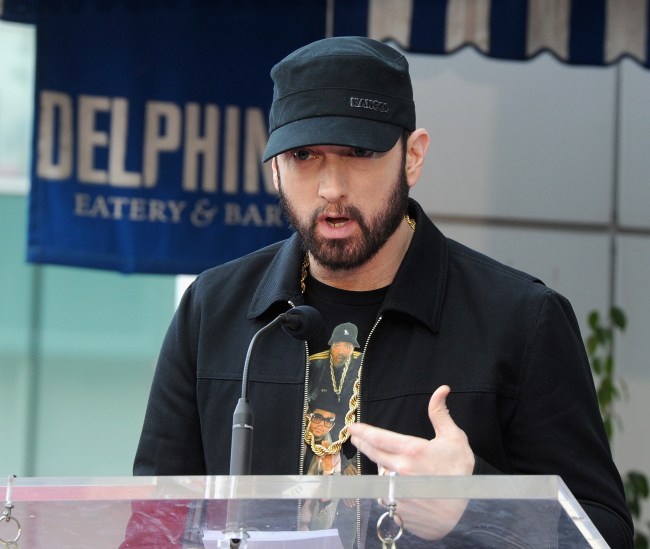 I don’t know what it is about watching amateur rappers test their chops against the pros but I’m always here for it whenever an aspiring artist shows actual talent online, or when they’re absolutely horrendous. I guess it’s not too dissimilar from the early days of American Idol when the producers would toss in a mix of extremely talented singers like Carrie Underwood and Kelly Clarkson alongside that dude who sang ‘Pants on the Ground’ and the other guy who went viral for his attempt to sing ‘She Bangs’.

There’s something about the amateur status crossing paths with professionals that makes it all that much more intriguing, and that’s exactly what we’ve got here with the ‘Godzilla Challenge’ that Emimen issued to his fans on Twitter.

Slim Shady’s asking his fans to replicate his lightning-fast verse from ‘Godzilla’ and send him the clips on Twitter for a chance to win some prizes and get reposted by Eminem himself. I started scrolling through the top tweets fully expecting to see some trainwrecks but A LOT of these attempts are legitimately good. This is surprising given that Eminem’s third verse on ‘Godzilla’ set the Guinness World Record for the fastest rap in history.

Here’s Eminem issuing the #GodzillaChallenge with the best responses below:

“Fill ‘em with the venom and eliminate ‘em” @triller #GodzillaChallenge is on. Who can spit it? Reposting + got prizes for my favorites. https://t.co/jWfW83X7P8 pic.twitter.com/jKMpJH7nw7

Now let’s check out some of the best responses with some hilariously bad attempts below as well:

Haven't learnt the words by heart quite yet 😂 #Godzillachallenge pic.twitter.com/zuviFlUovQ

i knew this would come in handy one day !!😈 #GodzillaChallenge my lungs couldn’t keep up pic.twitter.com/nzIG2Xh0Cl

I’m going to be honest, I didn’t catch many words in this one:

love ya, Eminem! I.. uh kinda tried it. Hope you somewhat enjoy it 🙃😀 #Eminem #GodzillaChallenge #Godzilla .. don’t have it memorized just yet but you are my favorite, so I had to go for it. #Godzillarap ✅ #marshallmathers pic.twitter.com/UT3aaDcLDJ

Did it one breath, Im also trying break the guiness world record book I can do about 650 words per minute for a speech record. Ive done “Rapgod” “Tung Twista by Twista” “Worldwide Choppers Sped Up” “Speedom Sped Up” and more. pic.twitter.com/qwyCDC8OMf

Could this guy be more nonchalant about it??

#GodzillaChallenge #Godzilla I knew being a stan will have some benefit's one day 😈"fill em with the venom" pic.twitter.com/YbG3JXIm77

Now let’s check out the…not so good attempts at the #GodzillaChallenge:

Who wants smoke? I just crushed this #godzillachallenge @eminem I’m ready to battle whenever! pic.twitter.com/GbjbK7b4Mk

It’s not exactly clear what these ‘prizes’ Eminem will be giving out includes but I’m sure they will be more than worth the minute-long attempt it takes you to film this clip and tweet it at Eminem using the corresponding hashtag #GodzillaChallenge.

Here’s the full song by the way, if you haven’t seen it yet:

I get exhausted just listening to that.