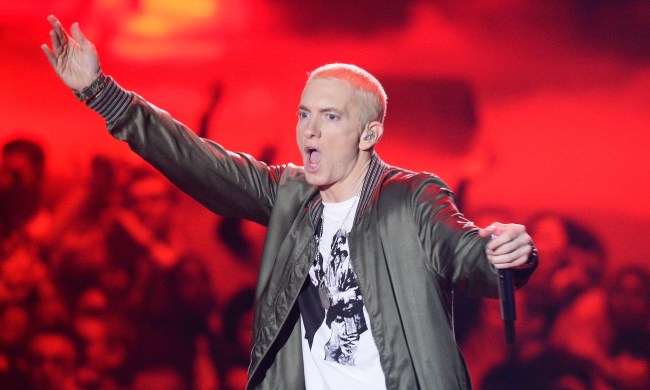 This isn’t the first time that rap icon Eminem has publicly blasted President Trump. Back in September while performing in Scotland he stopped his concert to speak his opinion on Trump and let’s just say he wasn’t very kind to The Donald.

However, this freestyle rap that Eminem dropped on Tuesday night at the BET Awards was even more blistering.

As for one of Shady’s lines about Trump, he had this to say, “When he attacks the NFL so we focus on that/Instead of talking Puerto Rico or gun reform for Nevada/All these horrible tragedies and he’s bored and would rather/Cause a Twitter storm with the Packers/Then says he wants to lower our taxes.”

He also added, “And any fan of mine/who’s a supporter of his/I’m drawing in the sand a line/you’re either for or against/And if you can’t decide/who you like more and you’re split/on who you should stand beside/I’ll do it for you with this.”

Then he closed it out by saying, “We love our country and we love our military, but we fucking hate Trump.”

Then he flipped off the camera and added a savage “fuck you” just for good measure.

At least one person mentioned appreciated the name drop…

I appreciate you @Eminem ✊🏾 pic.twitter.com/nwavBwsOkQ

And, of course, more than one person, because Twitter, made a joke or two…

“I’m about to drop my Eminem diss track. Everyone’s going to love it. You’re going to be very happy!” pic.twitter.com/TST9BElRDJ

It will very interesting to see how brisk sales will be for Eminem’s forthcoming album.