Emma Watson, aka Hermione, Has Gone ‘Dormant’ From Acting And We Are Not Ok Whatsoever 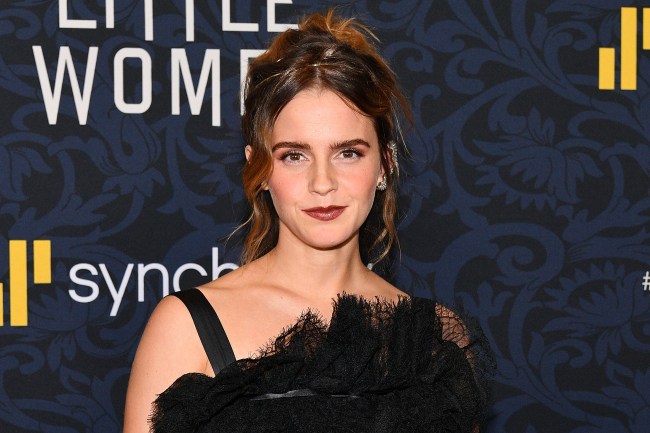 Emma Watson, the actress who famously portrayed Hermione Granger in all 400 of the Harry Potter movies, is trending. Why? Because the Daily Mail published an article saying that she is retiring from acting. But before we self-immolate, let’s take a look at the article:

Emma Watson has gone ‘dormant’ according to her agent. That appears to be movie-speak for she’s ‘given up acting’.

I can reveal the Harry Potter star, who has been famous since she was nine, has decided to step back from the limelight to spend time with rumoured fiance Leo Robinton, who she’s been dating for 18 months.

My source says: ‘Emma has gone underground, she is settling down with Leo. They’re laying low. Maybe she wants a family.’

She’s gone “dormant.” Hmmm. What a cryptic way to announce your client’s retirement. That sounds more like when a boxer has to vacate a title because they’ve been working on a country music album for the past 18 months. Doesn’t mean he’s done with boxing; just means he has a skoal ring in the back pocket of his jeans now.

The “source” part is a bit more troubling. But again, there are a lot of red flags about this piece. First, the writer laces it with first person pronouns. “I can reveal” and “my source” somehow make it all seem less “reliable journalist” and more… high-school rumor monger. This isn’t about you, Daily Mail; this is about Emma Watson. More importantly, it’s about us—the bereaved legions of Hermione stans who can’t fathom that our beloved muggle-born princess might pull the plug on her acting career at the tender age of 30! And for a man, no less?! OUR Hermione??!?!

If Emma Watson is retiring, I too shall retire… my own life

me when i read that Emma Watson had retired: pic.twitter.com/wYZ2Jc79Of

EMMA WATSON IS RETIRING ?? NO ONE TALK TO ME pic.twitter.com/qp1JDfPIsi

If you go through the tweets, it’s amazing to see how many of them are written in all the languages of the rainbow. The Harry Potter worldwide reach is truly insane.

I like to think that Emma is simply taking a breather. Leo does it ever couple of years too. No reason to think she won’t be back. But if this IS the end, just remember:

PS- the three original HP actors have done extremely well, honestly. Harry, Ron, and Hermione were cast in their roles at the ages of 11, 11, and 9 respectively. It’s impossible to make such a long-term bet on kids that young, hoping they’ll be able to carry a multi-billion dollar movie franchise on their shoulders for the next 15 years. And yet not only did they do that, they’re all now doing other cool stuff—taking offbeat roles, doing horror shows, live action musical Disney remakes… the kids have range. Makes me proud as hell.