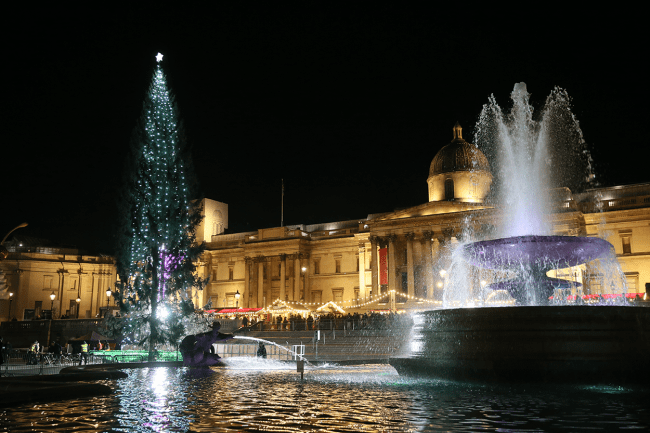 Every year, a Christmas tree is felled outside of Oslo and presented to London as a gift of thanks from Norway for Britain’s support during World War Two. This year, however, the British are not particularly grateful.

The tree is horrible looking.

Not to be ungrateful or anything but WTF is this threadbare Xmas tree in Trafalgar Sq? Thanks Norway, but can we have a refund? pic.twitter.com/UPeUVVfb6w

The 78-foot Norwegian spruce is displayed in Trafalgar Square and was lit up on Thursday night. The Lord Mayor of Westminster Andrew Smith and Mayor of Oslo Marianne Borgen helped fell the 80-year-old tree along with schoolchildren on Nov. 16.

Since then, it was transported by Norwegian authorities and propped up for all of London to see. The three has provoked quite a few responses, including demands that it be replaced.

It’s not hard to see why.

The Trafalgar Square Christmas tree has been lit up this evening.

The tall spruce is donated by Norway every year as a thank you for Britain’s support during the Second World War.

But some have said the tree looks ‘half dead’.

What do you think of it?

The tradition dates back to 1947 and celebrates friendship. It is also a token of gratitude for when the Norwegian royal family took refuge in London during WWII.

It is unclear as to exactly when the damage to the tree took place. Perhaps the damage took place on the 1,731 kilometer journey, because it was not in nearly as bad of shape on the day it came down in Norway.

Good job Twitter isn’t real life!!
The Trafalgar Square Christmas tree is appreciated by the vast majority. And is an amazing gesture from the people of Oslo.
Looking forward to the lighting tonight!
(Below, the tree coming from its Norwegian forest🌲) pic.twitter.com/1RaUMDOvWP

The tree ceremony took place on Thursday and it ended up looking alright.

Here’s this year’s @trafalgartree light switch on from #TheRooftop bar at The Trafalgar Hotel earlier this evening. The tree has been an annual gift to #London from the people of #Norway since 1947 🇬🇧 🇳🇴 #Christmas2021 #TrafalgarSquare pic.twitter.com/J7zMS6lKQq

At least one person is grateful!

To the people of Norway: many thanks for another lovely tree. #TrafalgarSquare pic.twitter.com/ExP5p6gk57

The rest of the responses were not nearly as positive. Some people joked that the tree caught COVID-19. Others said that it was a symbol of British decline.

These are some of the best reactions:

Norway’s getting needled over these Christmas Tree jokes.

I hope this tree had a PCR test before leaving Norway. https://t.co/DkGenlhVRp

This year’s Christmas tree from Norway is like being given socks by a relative who doesn’t like you very much anymore. pic.twitter.com/qQyn2jOOK5

Even Norway hates us now. https://t.co/dueVxI7Srn

There was nothing wrong with this year's Christmas tree from Norway. Unfortunately, they used Hermes to deliver it and the driver threw it over Nelson's Column. pic.twitter.com/Kgj8DpfrSi

Are we at war with Norway now? https://t.co/UDfWBx11in

Tt is certainly easy to understand why British folk are up in arms. The tree is not the most lush.