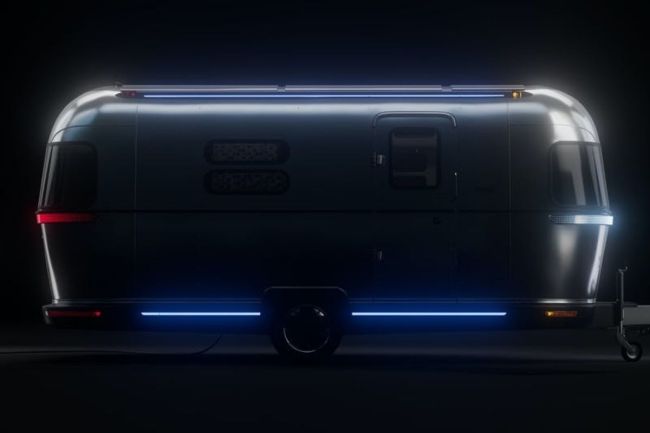 The electric vehicle space is starting to hit its stride. We’re now able to purchase all-electric SUVs and trucks that are better than their gas versions. Who would’ve thought?

One area in the electric automotive world that’s been getting recent buzz is RVs, motorhomes, and camping trailers. Earlier this week Winnebago announced their eRV concept camper van at the Florida RV Super Show. The camper van is built on a Ford Transit chassis and features a streaming quality wifi network and a battery capable of fully powering the van while off the grid.

Now Airstream has announced its own all-electric concept called the eStream. Let us tell you how cool this trailer is.

Legacy maker Airstream has commanded the trailer game for decades. The iconic aluminum caravans have existed as the #1 choice trailer for outdoor purists, design-lovers, and Americana collectors.

While we would take essentially any Airstream out on the market, the eStream is now at the forefront of our camping trailer dreams.

For starters, the eStream has the same classic look and feel like the standard Airstream trailer. Instead of trying to reinvent the wheel, designers went with the OG look and then dedicated all of their efforts to the technology of this bad boy.

Powered By Its Own Independent Motors

The eStream is built by Airstream’s parent company Thor Industries. Thor outfits the eStream with a high-voltage electric chassis that’s powered by independent motors and lithium-ion batteries. What’s cool is the chassis can be powered on its own. eStream will accelerate while hitched on the road, making it a lighter load for towing and improving gas mileage.

And perhaps the best feature of the eStream is you can connect your phone and power the trailer to move remotely into a preferred space or camping spot. You can also make it hitch and unhitch.

A Lineup of Awesome Features

Inside the eStream is a display of tools that allow you to monitor metrics like how many miles before the next charge and where the nearest charging stations are. The tools will even break down the specific kWh usage throughout the trailer so you know what’s drawing the most power at any given time.

eStream has Amazon Alexa integration, so you can control everything from the digital displays, to music, to lighting, and more inside the cabin as you relax in the great outdoors.

And while you relax in nature, you won’t have to worry about losing all of your juice. The eStream has two built-in solar panels on the roof to generate power while you’re enjoying your leisure time.

the eStream – made by same company as AirStream. AN electric version of the tow camper. Has batteries and wheel engines to increase towing distance. All the whiz bang electronics including a remote control, Alexa integration, and solar panels.https://t.co/cGqfGgnkvD pic.twitter.com/QrfGh1kpjQ

No estimated pricing has been revealed on the eStream yet but based on the fact it’s a one-of-a-kind product, we’ve pretty much got our cards ready to swipe.