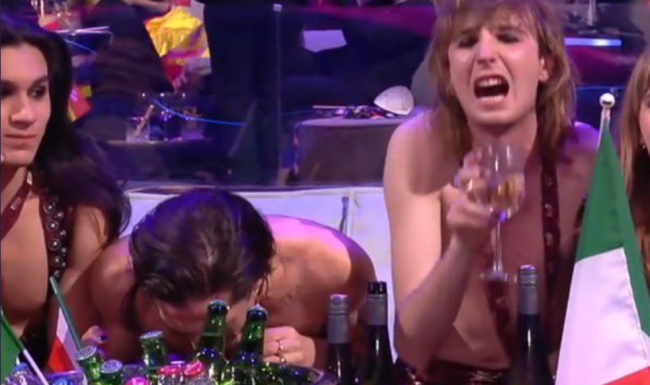 Italian rock band Maneskin won the Eurovision Song Contest on Saturday but one of their members found himself having a viral moment for the wrong reasons.

While the band awaited the final results, Maneskin lead singer Damiano David appeared to be getting his party on. While the camera was fixated on the band, David was accused of snorting cocaine on live TV by viewers at home when he ducked his head towards the table.

Doing cocaine /lines live on national tele.
And we are the ones getting 0 points
😂😂😂#Eurovision2021 #Italy pic.twitter.com/dbzd6ek9CN

In a press conference after the band’s Eurovision win, David denied that he was taking drugs on TV and claims he was just reacting to his bandmate breaking a glass when he looked down at the ground.

⚠️ Damiano from @thisismaneskin says that bandmate Thomas broke a glass in the green room. They were NOT snorting cocaine as Twitter has suggested. #eurovision #esc2021 pic.twitter.com/fTlcGejCYo

To everyone who keeps saying Damiano was using drugs: here's the proof that Thomas really broke that glass as they said in the Press Conference.
LET'S SHARE THIS PLEASE#Eurovision #maneskin pic.twitter.com/EJBx4YU50O

The EBU, which runs the Eurovision, says they are aware of the video and are looking it closely. The EBU says David has refuted the allegations and is willing to take a drug test when he arrives home.

“We are aware of the speculation surrounding the video clip of the Italian winners of the Eurovision Song Contest in the Green Room last night. The band have strongly refuted the allegations of drug use and the singer in question will take a voluntary drug test after arriving home. This was requested by them last night but could not be immediately organized by the EBU. The band, their management and head of delegation have informed us that no drugs were present in the Green Room and explained that a glass was broken at their table and it was being cleared by the singer. The EBU can confirm broken glass was found after an on site check. We are still looking at footage carefully and will update with further information in due course.”