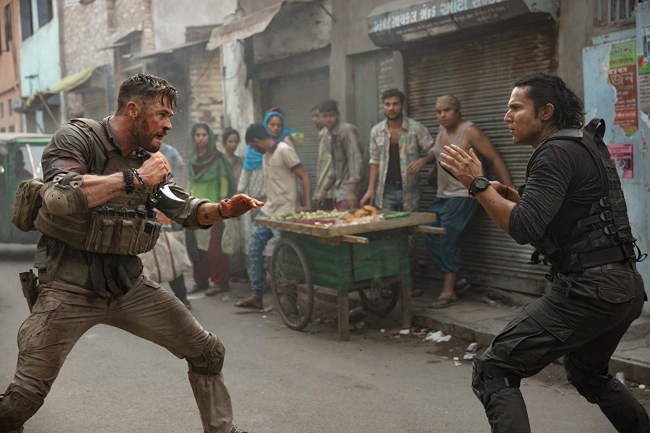 While our current global situation has essentially negatively impacted all of us, one company that may come out of the other side stronger is Netflix.

Not only are new subscriptions and viewership numbers spiking, but they may be the owners of the summer’s only true blockbuster, as the Russo Brothers-written and Chris Hemsworth-starring action flick Extraction has reportedly become the streaming giant’s biggest ever movie premiere. According to Netflix themselves, a “projected” 90 million households have tuned into the film in its first month of streaming.

As I wrote in my review, while Extraction certainly isn’t revolutionary, it’s solidly-made and is a throwback to a bygone era of midbudget action movies. The plot may be rudimentary and unsurprising, but the set-pieces are genuinely thrilling and Hemsworth is a movie star, which is really all you need to make a good action movie (just ask the John Wick franchise).

EXTRACTION is well on its way to becoming the biggest-ever film premiere on Netflix — with a projected 90 million households getting in on the action in the first 4 weeks.

Thanks to everyone who watched so far! pic.twitter.com/WqZWrW2gBV

Over the weekend, Hemsworth took to social media to thank the film community for their overwhelmingly positive response to the film:

Fans ought to be excited about Extraction‘s massive success as all of the pieces are now in place for the franchise to continue. Producers and writers Joe and Anthony Russo are certainly game for a prequel or a sequel, as is Hemsworth. And given the film’s record-breaking success, there’s no reason Netflix wouldn’t want to saddle up for another one (or two) movies. When the film came out, I wondered if it could become Netflix’s first true action movie franchise and that appears to be becoming the cast.

RELATED: ‘Extraction’ Director Explains How He Made *That* Electric 12-Minute Action Sequence