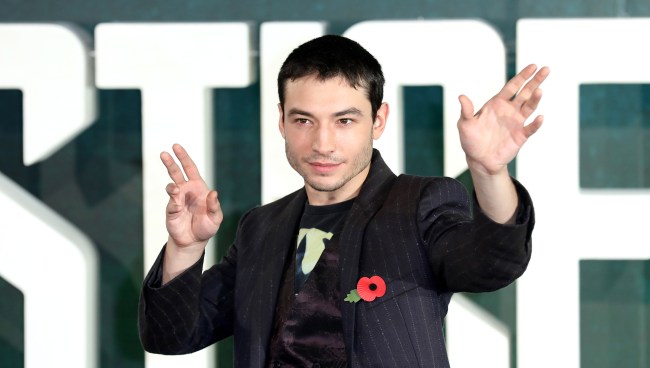 Justice League and Fantastic Beasts star Ezra Miller is facing some serious backlash as video of what appears to be him choking a female fan with no explanation given by the actor since the video went viral on the internet.

The 15-second video which has been watched over 4 million times on Twitter shows the 27-year-old actor being approached by a female fan. Miller then says to the fan, “Oh, you wanna fight? That’s what you wanna do?” and proceeds to grab her around the neck area and takes her down while asking her again, “You wanna fight?

A bystander watching the scene unfold appears to be about to step in as he tells Miller, “Whoa, bro, bro, bro…”

Supposedly the video takes place in Iceland as a news outlet in the country, Fréttabladid, picked up the story.

Fréttabladid reports that the incident too place at the entertainment venue Prikin in Reykjavik and first appeared in a post on Reddit with the description, “Ezra Miller has been in Iceland for several weeks. This is him losing control after my friend jokingly asked him to fight.”

It is still unclear whether Miller was joking or not, but the owner and managing director of Prikin declined to clarify the situation, saying, “Unfortunately, we do not want to comment specifically on this incident unless it is under review.”

Numerous media outlets including Page Six, The Independent, TMZ, The Daily Dot and Comicbook.com have reached out to Miller’s representatives and so far have received no response.

ezra miller fully choked a fan after being jokingly asked to fight ???? what the fuck
pic.twitter.com/JMkFUGdqkZ

Numerous people have commented on the video and perhaps most notably On My Block star Diego Tinoco, who tweeted, “Dam.. insanely inhuman to disrespect and a harm a fan like that. Don’t know the whole backstory but I don’t think I have to. People get so clouded up in their heads with vanity they think they can do whatever they want to whoever they want. Fuck Ezra Miller.”

Dam.. insanely inhuman to disrespect and a harm a fan like that. Don’t know the whole backstory but I don’t think I have to. People get so clouded up in their heads with vanity they think they can do whatever they want to whoever they want. Fuck Ezra Miller

While many agreed with Tinoco’s assessment, others are still withholding judgement until some further clarification of what exactly happened is revealed.

The person who claimed he was actually there when it all went down offered his take on the situation.

Since a lot of y'all are confused as to what is happening- pic.twitter.com/Qzv7Xsykhz

Another commenter on Reddit claimed, “Context from Twitter from the girl who originally posted the video is that apparently Ezra was showing off his scars from fights he had gotten into, the girl jokingly told him she could probably kick his ass and he took it a little too seriously. After they got him off her he was standing around barefoot waiting for the bouncers to take him away. Idk, he may have been drunk but was very strange.”

Sources at the bar told TMZ police were not called, but Miller did get kicked out.

Regardless of the truth, people are not happy with Ezra Miller today.

Ezra Miller turns out to be problematic I fucking hate 2020 pic.twitter.com/s2EhXjgPrK

checking out why ezra miller is trending. that’s enough internet for me pic.twitter.com/w4vZOnE8ga

Ezra Miller when he does Meet and Greet. pic.twitter.com/YsrZMF9W2k