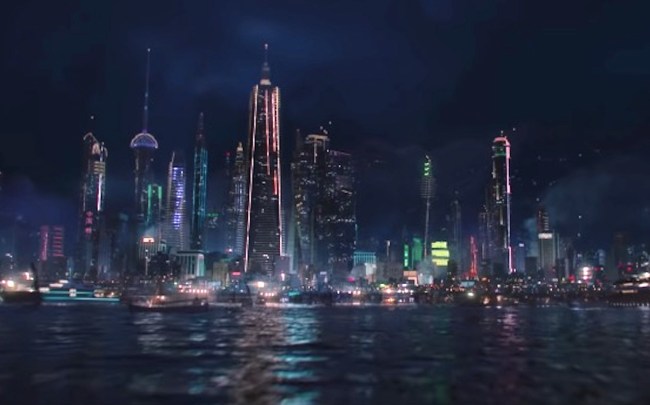 Editor’s Note: This article was originally published in December 2020. Given the new trailer for The Falcon and the Winter Soldier that was aired during the Super Bowl, we figured it was relevant again, especially considering how heavily it seems Madripoor will feature in the series.

Despite the fact that it’s been almost a week since Disney’s Investor Day last Thursday, the Mouse House simply rolled out so much content that there’s *still* plenty to be analyzed and broken down. Yesterday, we took a look at Loki while revealing we’re hearing reports that Jonathan Majors’ Kang the Conqueror — likely the next “big bad” in the Marvel Cinematic Universe — will show up in the series. Today, though, we’re taking a look at March’s The Falcon and the Winter Soldier and how it *could* begin to lay the foundations for Wolverine’s arrival into the MCU.

As eagle-eyed fans might’ve noticed, one of the earliest shots of the trailer show Sam Wilson and Bucky Barnes in a very Tokyo-esque city, one that we certainly haven’t seen in the MCU before. We believe that city is Madripoor, which — similar to Sokovia and Wakanda — is one of the few fully fictional locales in the Marvel Universe.

The reason that the introduction of Madripoor is of note, other than the fact its expanding the scope of the MCU, is that it’s got quite the strong connection to a certain iconic Marvel character with a storied history of traveling to the far East… and that’s Wolverine.

Like Wakanda and Sokovia, it's one of the few fully fictional locales in the Marvel Universe.

It also happens to have strong ties to a certain iconic character with a history of traveling east 👀 pic.twitter.com/Jsd2hV7j8D

Madripoor is an island in Southeast Asia, located in the southern portion of the Strait of Malacca, southwest of Singapore. Its capital and single large city was Madripoor, which was divided between wealthy Hightown and impoverished, crime-ridden Lowtown. This served to represent the extreme social inequality in Madripoor, described as “A place for the very rich and the very poor.” Madripoor was once a haven for pirates, a tradition that had somewhat continued to present day with its lawless quality. The island is best known because of its relation to the mutant known as Wolverine. [via Fandom]

Now, to be clear, while I don’t think Wolverine appears, or is even name-checked, in The Falcon and the Winter Soldier, the MCU expanding to distant corners of their world suggests that Marvel is broadening its scope in both location and character. Wolverine is guaranteed to be brought into the MCU within the next five years and the introduction of Madripoor could very well be the first step in that process. Really, it’s only a matter of time.