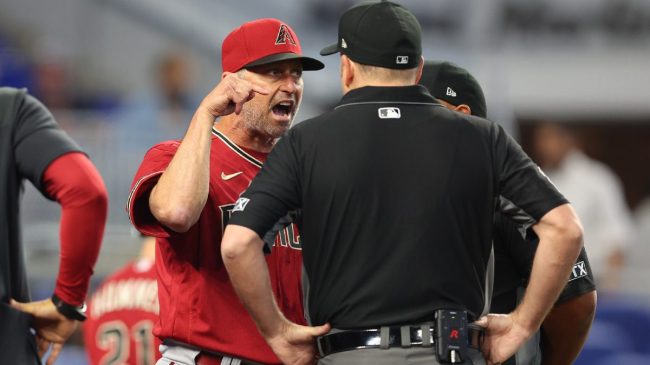 In the first inning of the Diamondbacks’ matchup against the Marlins, the lefty was tossed after making a few remarks to the home plate umpire. Things then escalated with Bumgarner having to be physically restrained by teammates.

The pitcher was livid with the decision, and upon further review, it appears he has a point.

Bumgarner first made a comment to the home plate ump while walking off the field in the first frame. The man behind the dish wasn’t the one who tossed him, though.

It was the first base umpire that threw Bumgarner out of the contest, and it appears that he had it out for the veteran from the get-go.

Umpire stares down Madison Bumgarner before ultimately tossing him

He was staring into his soul @Starting9 pic.twitter.com/ZBEpgG87ZF

While the pitcher appeared to only take issue with a call from the home plate blue, it was the first base umpire that made the call to toss him.

And it looks like he intended to do so from the start.

In the video above, you can see the ump just staring down Bumgarner as he checks his hands for sticky substances. The pitcher doesn’t even acknowledge him at first, but when the hand massage goes on for longer than planned, Bumgarner looks up.

He quickly turns up, at first not realizing what’s happening as he turns his attention back to his hand. Then, as if he was surprised to see the umpire staring him down, he lifts back up.

One quick word from Bumgarner was enough to earn the ejection. But was it warranted?

Most believe this is a case of an egotistical umpire going on some sort of power trip to throw one of baseball’s biggest personalities out of the game.

Fans were quick to back Bumgarner while noting that the umpire was out of line. Some went as far as to call for his job.

Power trip by the ump here. What a loser https://t.co/DdmNkvgisg

The umpire should be tossed as well wtf is this Bumgarner has every right to get pissed about this https://t.co/8yUH3aZpFN

So about this robot umpire thing… y’all got an eta? https://t.co/hHXUqAfejI

Are umpires supposed to check the pitcher’s hand or just bait them to do something so they get thrown out? @umpjob @MLB https://t.co/RpOg8SQLD0

Umpire should be suspended. Clearly provoking a player https://t.co/VxhmZjVRWS

This guy should be fired https://t.co/bzu7QkWreb

Extremely unprofessional and unwarranted. Guy just wanted to make it all about him

We’ll see if the MLB deals out any punishment for this umpire after the game.