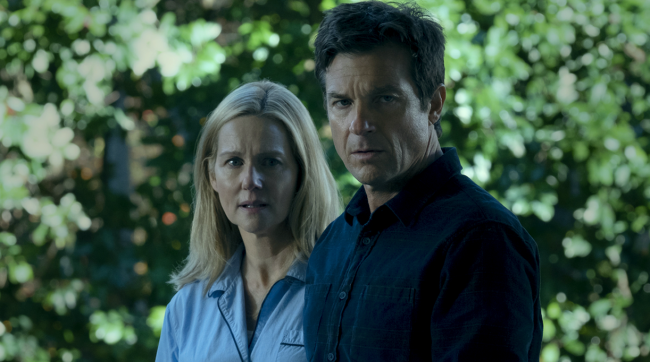 Ozark, starring Jason Bateman, Laura Linney, Sofia Hublitz, Skylar Gaertner and Julia Garner, was one of the biggest hits Netflix has ever produced. The writing was stellar, the acting impeccable, the scenery incredible, and fans absolutely loved the award winning show.

So, when the final season of Ozark was announced many fans were more than a little curious as to how a show about a married couple who moves their family to the Lake of the Ozarks to do a little money laundering for a drug cartel could possibly end.

Turns out, it ended with a bang.

When relentless private investigator Mel Sattem shows up with only a few minutes to go in the series finale of Ozark, and he has the goat cookie jar containing the ashes of Ben Davis, Wendy’s brother, viewers knew something was about to go down and very quickly.

There weren’t, however, a lot of people who expected what happened next.

As the Byrdes stood there contemplating what their next move was going to be in the face of rock solid evidence of them having Ben killed, none other than son Jonah Byrde shows up with a rifle and blows … something away.

What was it, or who was it, that Jonah actually shot though?

As is always the case with series finales such as this, Ozark fans produced a plethora of fan theories about what really happened when Jonah pulled that trigger.

Over on Reddit, user orchardfurniture made this observation: “Given that both Marty and Wendy had that sly smile while Jonah was about to pull the trigger, to me, showed they had come to terms with the people and family they had become. I imagine that the next generation of Byrdes will simply continue the cycle that their parents started.”

Redditor BBQTuck wrote, “Having the Byrdes essentially get away with everything while leaving a stream of corpses in their wake is a sadistic way to end the show, but also a pretty unique one.”

“The final scene is an evocative one, showing the complete destruction of Jonah’s morality and conscience by turning him into a cold blooded and ruthless killer who is hell bent on defending his family at all costs,” Redditor Droidjoy wrote.

So we’ve got three votes for Jonah shooting Mel.

“How is everyone so sure he didn’t just shoot the goat with the ashes?” asked Redditor eggn00dles.

“The way Jonah took aim, I get the feeling he shot the goat candy jar (to destroy evidence) and not Mel…?” continuumdrift echoed.

Brady Langmann of Esquire addresses that fan theory and one more.

“We know that Jonah is clever as all hell. He thinks quickly. Was always a great shot. Couldn’t you see — as Mel ranted about his treasured evidence—the gears turning in Jonah’s head, realizing that if he shot the jar, he effectively foils Mel?” he writes, then adds, “The kid opting out of violence, and exploding the creepy goat cookie jar, would be the truest to his character.”

There is also another, far darker fan theory about the ending to Ozark that’s been making the rounds.

“You could argue that Jonah shooting Wendy would somehow rid the family of the root of its evil, so to speak,” he wrote. “But that would just cause further complications with Sattem, because, again, the man has a police badge now. Maybe he’d just arrest Jonah, before taking down the rest of the family, as he planned.”

He, and I, are not buying into that one. At least not completely.

Here’s one more for you. What if Jonah didn’t shoot anything? It was just a warning shot to Mel to leave the goat and get the hell of the Byrde’s property and never come back. I mean, if the kid is willing to brandish a rifle and point it at him, firing off a shot, would you come back?

I guess we will never know.