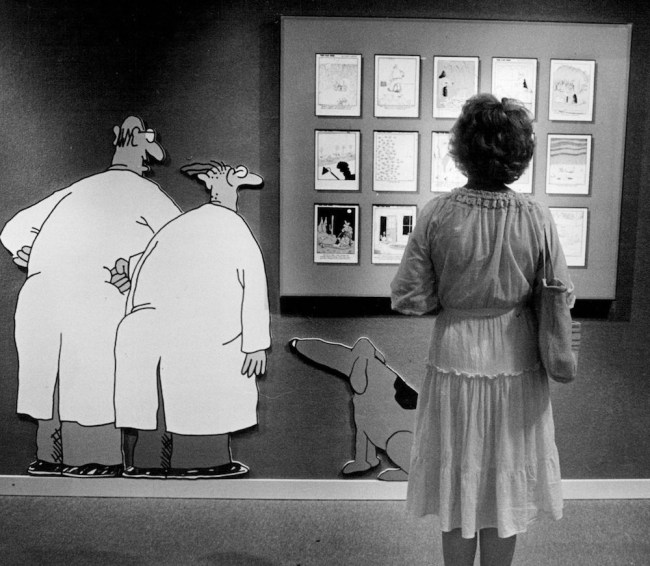 As a kid, I religiously read comic strips in the newspaper. What’s a newspaper? Ask your old man.

Comics were so influential that, at one point, my dream was to have my own comic strip. Unfortunately, two roadblocks were in my path to success – I couldn’t draw and I’m not really that funny.

My favorite two strips – which will be easy to guess considering my age – were Calvin and Hobbes and The Far Side.

While the type of humor in each title is different, the two popular comic strips share one distinction – the creators of both just up and peaced out one day.

Calvin and Hobbes creator Bill Watterson put down the pen in 1995 after ten successful years. Gary Larson, the creator of The Far Side, chose the same year to leave fans hanging.

Watterson keeps a low profile and lives in Cleveland. Larson would come back once in a while to do a cartoon for the New York but nothing Far Side-related.

Well finally, after 25 years, Larson is back with three new Far Side comics.

After updating the web 1.0 Far Side website back in December 2019, Larson just published three single-panel comics along with a letter.

In the letter, Larson makes sure to say from the jump, “I don’t want to mislead anyone here. This corner of the website—“New Stuff”—is not a resurrection of The Far Side daily cartoons.”

Despite my retirement, I still had intermittent connections to cartooning, including my wife’s and my personal Christmas card. Once a year, I’d sit myself down to take on Santa, and every year it began with the same ritual: me cursing at, and then cleaning out, my clogged pen. (Apparently, the concept of cleaning it before putting it away each year was just too elusive for me.)

As problems go, this is admittedly not exactly on the scale of global warming, but in the small world of my studio, it was cataclysmic. Okay, highly annoying.

So a few years ago—finally fed up with my once-loyal but now reliably traitorous pen—I decided to try a digital tablet. I knew nothing about these devices but hoped it would just get me through my annual Christmas card ordeal.

I got one, fired it up, and lo and behold, something totally unexpected happened: within moments, I was having fun drawing again. I was stunned at all the tools the thing offered, all the creative potential it contained. I simply had no idea how far these things had evolved.

Perhaps fittingly, the first thing I drew was a caveman.

Unfortunately, for copyright reasons, we can’t publish the comics here without Larson’s permission. Readers can find the new comics over on TheFarSide.com.