U.S. Government Wants $7.4 Million From Martin Shkreli And May Seize His Wu-Tang Album 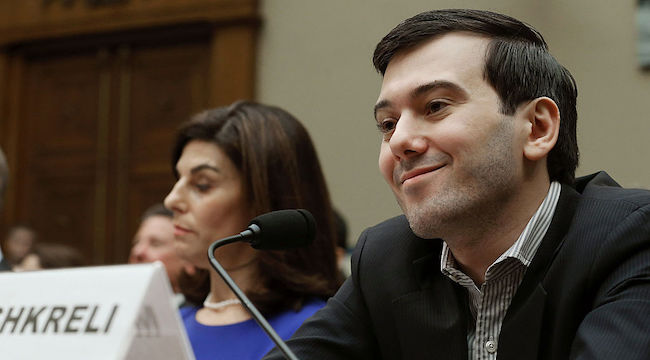 The U.S. government says Martin Shkreli should pay up more than $7.4 million in assets in relation to his securities fraud conviction. The feds have made a lengthy list of assets that they may seize from the former disgraced pharmaceutical executive including his illustrious Wu-Tang album “Once Upon a Time in Shaolin.”

In 2015, Shkreli bought the one and only copy of Wu-Tang Clan’s album for $2 million, which has yet to be released. In 2016, Shkreli purchased Lil Wayne’s long-awaited album “The Carter V.” With his wealth, Shkreli also bought a Picasso painting and a code-breaking Engima machine from World War II. The U.S. government wants to seize these expensive assets. In addition to confiscating these assets, the government said it will keep the $5 million bail the 34-year-old Shkreli posted. Shkreli is scheduled to be sentenced in January and later this month his lawyers will attempt to repudiate the forfeiture requests. Shkreli has been in jail since September when Judge Kiyo Matsumoto revoked his $5 million bail. 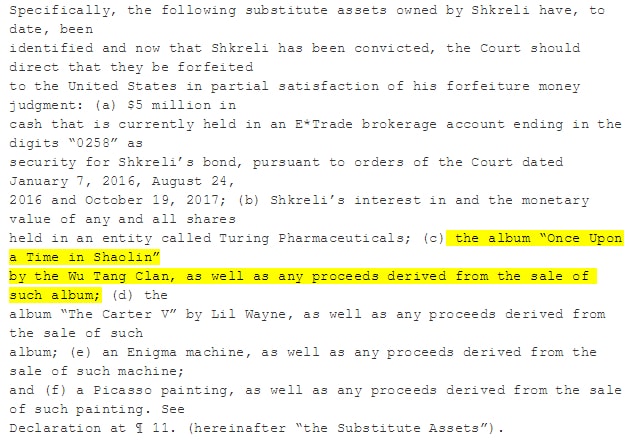 The feds said they were lenient with the $7.4 million. “This total amount represents a conservative computation of the proceeds Shkreli personally obtained as a result of his three different securities fraud crimes of conviction,” stated court papers filed late Thursday. “We will vigorously oppose the government motion,” said Shkreli’s lawyer, Benjamin Brafman. “Our position is clear. None of the investors lost any money and Martin did not personally benefit from any of the counts of conviction. Accordingly, forfeiture of any assets is not an appropriate remedy.”