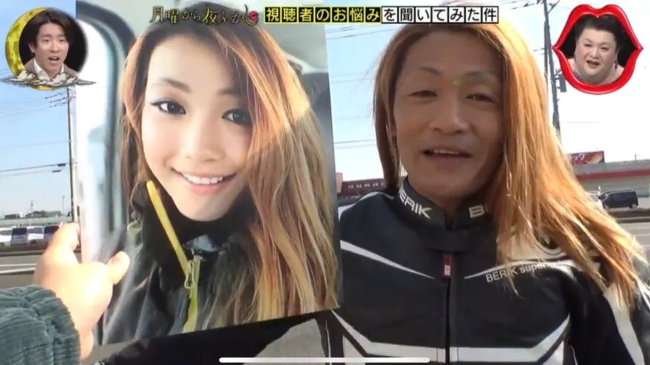 A cute female motorcyclist who garnered thousands of followers on social media has been revealed to really be a 50-year-old man using FaceApp after internet detectives noticed something funny with his photos.

The young female Twitter star, @azusagakuyuki, who is actually a 50-year-old man named Zonggu, made the reveal on the Japanese variety show Monday Late Show.

Vice reports that the show’s production team had apparently tracked down the biker expecting to meet with a young female motorcycle enthusiast, but were instead confronted with a middle-aged man.

According to the BBC, some of the biker’s followers started to get suspicious when they noticed a reflection in the mirror of one of the photos showed a different face. Whoops!

Zonggu admitted on the show that he had used the FaceApp and other editing tools because he wanted to increase his presence on social media and thought he could get more followers by posing as a “younger beautiful woman” rather than an old “uncle.”

“No-one will read what a normal middle-aged man, taking care of his motorcycle and taking pictures outside, posts on his account,” he said.

“First I just tried, then it happened to turn out to be fairly pretty. I get as many as 1,000 ‘likes’ now, though it was usually below 10 before. I got carried away gradually as I tried to make it cuter.”

Of course, this being Japan, rather than losing all of his followers after revealing his deciet, Zonggu’s number of followers on Twitter jumped from around 19,000 to over 25,000.

“It’s been a while since I’ve enjoyed TV like this,” wrote one commenter on Twitter following the airing of the show.

Well, at least that glorious mane of hair was real. You keep doing you, Japan.