Fernando Tatis Jr. Hit A Ball Into Outer Space And SLAM DIEGO IS OFFICIALLY BACK! 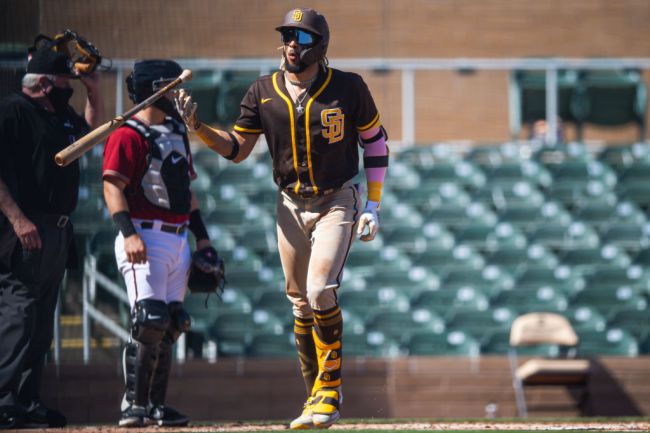 You may have heard about NASA’s Perseverance rover landing on Mars, but did you know that Fernando Tatis Jr. sent his own mission to the Red Planet on Tuesday? The 22-year-old got PAID during the offseason and picked up right where he left off in San Diego’s second Spring Training game of 2021. With ducks on the pond in the second inning, Tatis Jr. stepped up to the plate and sent the first pitch of the at-bat 411 feet to clear the bases.

While the tater itself is awesome, the commentary from the man behind the camera makes it even better.

“You don’t want to put it up and 91,” he says, before Diamondbacks pitcher Caleb Smith does exactly that. “And he put it up and… 91! You’ve got to be shitting me!”

Here is another look at the monstrous moonshot.

Before you even have to ask, the answer is yes, he flipped his bat.

Tatis Jr. is the future of baseball on a Padres team that believes it is ready to compete right now. They locked up their superstar for more than a decade before camp began, paying him an astonishing $340 million over the course of the next 14 years. The investment is already paying off and Tatis Jr. picked up right where he left off. This, of course, isn’t the first time that he has done this, most notably celebrating a home run in the playoffs with a HUGE bat flip. He and his teammates also made history by hitting a grand slam in four consecutive games last season, earning them the nickname ‘Slam Diego.’