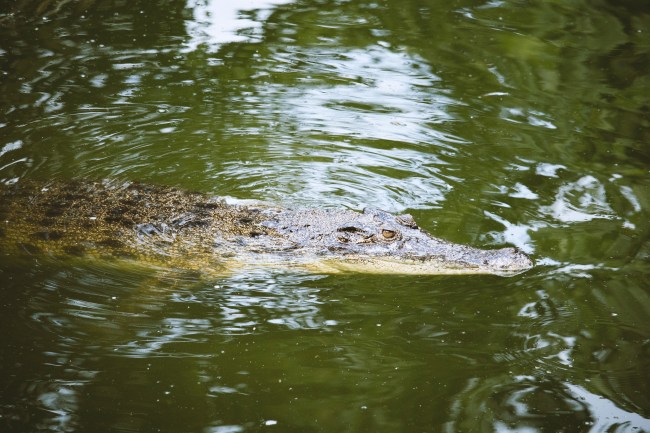 The headline is not a Mad Libs jumble of words, it is actually a weird news story that happened in real life. A man was bitten by Fidel Castro’s crocodile while attending a crawfish party in Sweden and had to be rushed to the hospital. We live in the strangest timeline.

On Tuesday, an elderly man was attending a private party at the Skansen Aquarium in Stockholm, Sweden. The man was attending a crawfish party, which is a Swedish tradition that takes place this time of year. The man may have had crawfish smells on his fingers because a crocodile attacked the man.

But it was not just any old crocodile, this was the crocodile once owned by former Cuban dictator Fidel Castro. The Cuban leader gifted two crocodiles, named Castro and Hillary, to Russian cosmonaut Vladimir Shatalov in 1978.

Shatalov later donated the animals to the Moscow Zoo when they became too large and dangerous. The reptiles were given to the Skansen Aquarium in 1981 because the zoo could handle the dangerous crocodiles better.

Fidel Castro was the leader of Cuba from 1959 until 2008. In case you’re wondering, the lifespan of a saltwater crocodile is 70 years.

The victim reportedly was giving a speech and dangled his “arm on the wrong side of the security glass” when he was bitten according to police control room officer Mikael Pettersson. That’ll happen when you make your hand bait for crocodiles.

Thankfully for the man, there were a few doctors in attendance at the crayfish party and they helped stop the bleeding by “using a belt and napkins” before medics arrived and took him to the local hospital. The man, who is in his mid-70s, is said to have had “severe wounds on his arm” and is in stable condition.

“What I saw was that he climbed up on a rock and was holding one of his arms over the glass barrier of the crocodile exhibit because he was going to give a speech,” said Jonas Wahlström, head of the Skansen Aquarium. “He turned his back and the crocodile saw his hand coming down from his arm and just attacked him and bit him.”

The attack lasted about 10 seconds and then the crocodile let go of the man’s arm.

“Nothing like this has ever happened with these crocodiles before, we’ve had them for more than 40 years,” Wahlström said. The aquarium will be examining the animal’s enclosure to see if upgrades need to be made to ensure the safety of guests. We all learned an important lesson today: Don’t put your hands in the crocodile exhibit.