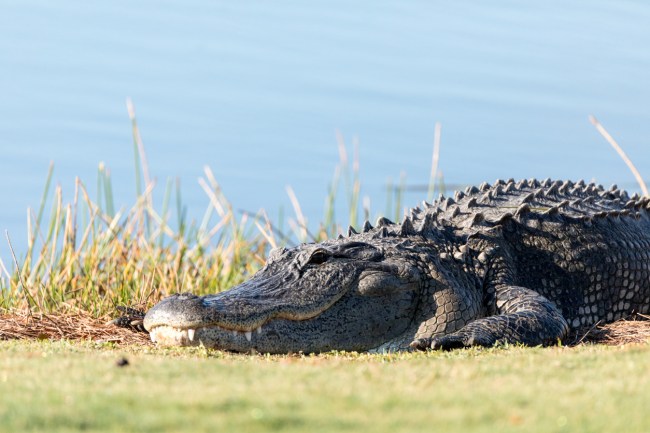 Dogs are often referred to as “man’s best friend,” but us humans are pretty good companions for our canines as well. And it’s not just about buying dog food that is organic, non-GMO grass-Fed and cage-free or a super comfy dog bed. Humans will defend our pets in a time of danger like this 75-year-old Florida man did when a dog was attacked by a large alligator.

We take you to Palm Harbor, Florida, right outside of Tampa, where one man was ready to fight a gator to rescue a lovable dog. Buddy Ackerman was walking Osi, his daughter’s golden retriever, near his condo early in the morning. The duo got a little to close to the retention pond in the area when an alligator made a surprise attack on Osi.

“All of a sudden I see the water rippling right along in here,” Buddy told Action News. “Almost seemed like an explosion.”

The alligator emerged from the water and chomped down on the pooch at the exact moment Osi was taking a dump. Talk about literally scaring the sh*t out of you. First you say it, then you do it.

“He was squealing a good bit when the thing grabbed him,” Ackerman said. “Me, I’m a nervous wreck, I go up and slip and fall on my rear end, and the two of us are tugging. Alligator is going one way, I’m going the other.”

After pulling on Osi’s leash didn’t work, the 75-year-old Florida man channeled his inner Chuck Norris and kicked the nearly 8-foot-long gator right in the snout. Finally, the reptile released the dog from its jaws of death and Osi scurried off. Osi and Buddy suffered no injuries from the alligator attack.

Ackerman told the Times he first tried pulling on Osi’s retractable leash to free the pup. He then kicked the gator until the reptile released the dog. Osi ran to safety and didn’t suffer any injuries.

Ackerman called the Florida Fish and Wildlife Conservation Commission after the attack and FWC trappers arrived later that day to take the gator away.

“My father is our hero, Osi and I are so very grateful that nobody was hurt,” said Ackerman’s daughter Jody.

Buddy was happy that Osi was a Golden Retriever and not a bite-sized doggo. “I don’t know what would have happened with people with little Pekingese or something running around,” he said. “I guess we’d say goodbye.”

No word from officials on whether the alligator in the attack was all hopped up on drugs like the meth gators in Alabama.