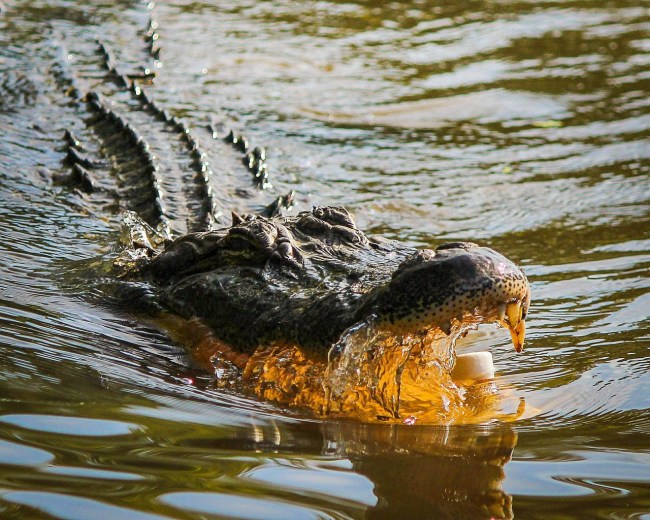 Despite having all of the capabilities of being killing machines, alligators very rarely attack humans. Last week, a rare occurrence happened in Florida and authorities have found human remains in the alligator’s stomach.

The body of Michael Ford from Fort Meade, Florida, was found in a canal in Polk County, about 60 miles east of Tampa. A local citizen informed authorities that they saw a piece of the man’s body in an alligator’s mouth.

The Florida Fish and Wildlife Conservation Commission (FWC) trapped and killed the alligator, which was no easy task because the beast was massive. Reports indicate that the gator was 12 feet long and weighed 450 pounds. Human remains were discovered in the gator.

To give you an idea how big the gator was, here’s an alligator of the same size that was caught in 2012.

A necropsy reportedly found Ford’s hand and foot inside of the alligator’s stomach. Authorities say Ford’s body had cuts and wounds caused by the alligator. Michael Ford’s cause of death is drowning. A toxicology report is still pending.

A few weeks ago, a woman was attacked by an alligator at Fay Lake Wilderness Park, about two hours away from Fort Meade.

There have only been six reported fatalities from alligator attacks since 2016, which have all occured in the South including Hilton Head, South Carolina; Davie, Florida; Charleston, South Carolina; Lakeland, Florida; and in Walt Disney World Resort in Orlando when a two-year-old wandered near the Seven Seas Lagoon and an alligator snatched the child.

The FWC warns people not to feed alligator (which is illegal in Florida) and keep your distance if you see one. You should only swim only in designated areas and alligators are most active between dusk and dawn, so try to swim during the day.