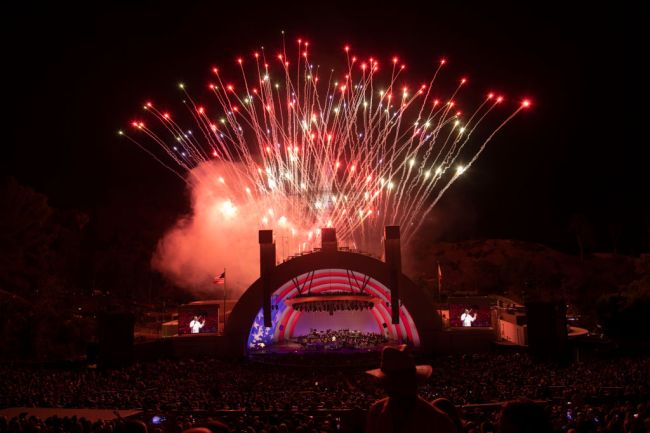 There are a few things that the 4th of July just wouldn’t be the same without and fireworks is near the top of that list. Every year, despite public safety concerns in Los Angeles county, thousands of L.A. residents light up the night sky like, well, the 4th of July.

In some ways, the deliberate use of illegal fireworks is even more patriotic. Much like our forefathers, Los Angelenos rebel against the government. Admittedly, that might be a stretch to justify fireworks after . Because they’re awesome.

After a year without gatherings and large celebrations, this year’s display was even more substantial.

The aerial view is mesmerizing, take a look:

Here are some other videos from around the city:

With the 4th of July holiday being one of their busiest days, fire officials urged the public to attend professional fireworks shows. Sky5 was over the Rose Bowl in Pasadena. pic.twitter.com/sfXNrARxpp

Most of the southland’s sanctioned firework displays were over by 10:30pm but the displays continued across the area well into the morning.

When the evening was (pretty much) over, a cloud of firework smoke covered the city. Air quality in Los Angeles was extremely poor, based solely on the amount of explosives that were set off.

Your aerial look at the current air quality in Los Angeles following a night of #Fireworks. An hour ago we could see downtown clearly… not so much anymore. @CBSLA #DTLA #lafireworks pic.twitter.com/Cjv2h3ooXV

If you're wondering why the AQI in parts of Los Angeles are so bad… 15 minute time lapse off one of the local @alertwildfire cameras. #illegal #fireworks https://t.co/uSXvvFkTrL pic.twitter.com/H4pHvnIbeK

While the L.A. air is always smoggy, especially after the 4th, the air quality reached a new level in 2021.

It’s foggy from fireworks. Last year, Los Angeles didn’t reach this level until around 2am. It’s only 9:30p. They’re just getting started… pic.twitter.com/0ENBrHq83w