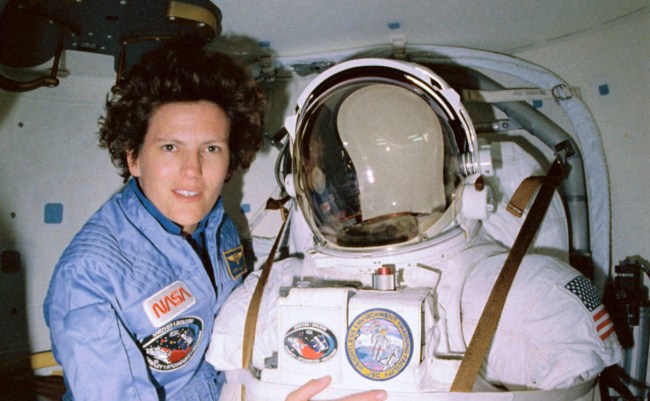 Sullivan, who NASA calls an “American Original,” became the first American woman to walk in space back in October of 1984, was part of the Discovery crew deployed the Hubble Space Telescope, and logged over 532 hours total in space.

This past weekend, the 68-year-old Sullivan also became just the eighth person to reach the bottom of the Challenger Deep – 35,810 feet (almost 7 miles) below sea level.

36 years after my space walk, I became the first woman to dive to the deepest known spot in the ocean – the Challenger Deep. #WorldOceansDay pic.twitter.com/KWJxx4fBYR

“As a hybrid oceanographer and astronaut this was an extraordinary day, a once in a lifetime day, seeing the moonscape of the Challenger Deep and then comparing notes with my colleagues on the ISS about our remarkable reusable inner-space outer-spacecraft,” said Dr. Sullivan.

Even cooler than that, Sullivan marked the occasion by making calling NASA astronauts on the International Space Station from the DSSV Pressure Drop, the mothership of submersible DSV Limiting Factor.

“It was amazing to set up a conversation between two ’spacecraft’; one operating as a platform for research in outer space, the other an exploration vehicle for ‘inner space’. Two groups of humans using cutting edge technology to explore the outer edges of our world,” said EYOS Expeditions expedition leader Rob McCallum. “It highlighted the vast span of human endeavour while at the same time linking us close together as fellow explorers. We are well used to our clients being ambitious in their quest to explore… but this was a new ‘first’.”

Victor Vescovo, the owner of the DSSV Pressure Drop and the submarine Limiting Factor and in 2019 became the fourth person to reach Challenger Deep, piloted the craft.

“We made some more history today… and then got to share the experience with kindred spirits in the ISS,” said Vescovo. “It was a pleasure to have Kathy along both as an oceanographer during the dive, and then as an astronaut to talk to the ISS.”