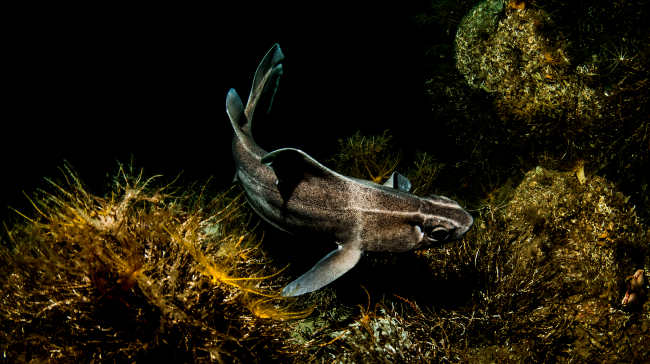 Italian Naval officers recently discovered a bizarre-looking deep sea creature floating in the waters near the Darsena Medicea marina in the town of Portoferraio on the island of Elba.

The creature, a fish with the body of a shark and the face of a pig, looks like some kind of mutant dinosaur. Which it kind of is because once it was pinpointed to be a angular roughshark (Oxynotus centrina), it was realized that the odd-looking fish normally lives up 2,300 feet (700 metres) below the surface.

The angular roughshark, also known as, wait for it… a pig-faced shark, is reportedly extremely rare and is listed on the IUCN Red List of Threatened species.

According to Yuri Tiberto of the local Elba Aquarium, the angular roughshark is more than just pig-faced, it also “emits a kind of grunt” when it comes out of the water.

“In the sea of the Tuscan archipelago, so rich in biodiversity,” Tiberto told local media. “It is not uncommon to find this fish, and I can safely say that I often receive reports telling me of ‘pig fish’ that have ended up in local fishing nets.

“I also tried for a period to host it in one of the tanks at the aquarium, but soon I gave up because I saw that it is a species that does not adapt to captivity.”

The angular roughshark was eventually taken to the Harbour Office to be studied before being tossed.

Commenters on the Facebook post showing the strange creature expressed outrage and confusion at both what the fish was, as well as why it washed up dead near the marina.

“Poor shark looks like he woke up early, had a day at work and, then came home to a house full of screaming kids and an angry wife,” one person commented.

Nature is so metal.