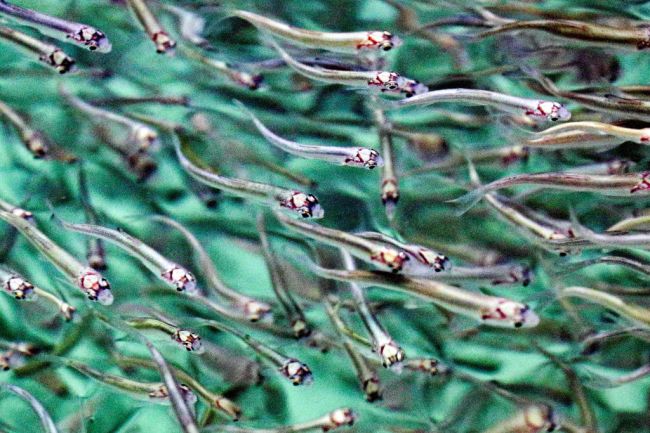 Thousands upon thousands of fish are being dropped into lakes across southern Utah this month. The fish are dumped from a plane flying overhead and it is completely mesmerizing.

This week the Utah Division of Wildlife Resources stocked fish by air. The DWR stocked 200 high-elevation in southern Utah with fish between 1 to 3 inches long. Aerial stock fishing has been done since the 1950s. pic.twitter.com/wGjJoeA5en

Fish stocking is a very common and often important practice for bodies of water around the glob. The practice dates back to at least the 1800s and is done for a few reasons.

Whether it be done for the benefit of commercial, recreational or tribal fishing, or to help restore and increase a population of endangered fish in a specific region, the concept is simple. Fish are raised in a hatchery and then released into a river, lake or ocean to supplement a population.

In Utah, the Division of Wildlife Resources takes a wild approach. They drop 35,000 hatchery-raised fish into local lakes by plane— a practice that began in the 1950s.

Wildlife authorities in the US state of Utah have restocked lakes with fish by dropping them out of a plane.https://t.co/daRCL5kd4E pic.twitter.com/3wzu4pcQW2

There are a lot of factors that go into the aerial drops and they help answer some of your burning questions.

How does it work?

The fish are “fingerlings,” which are about 1-3 inches long. If they were any longer, they might not survive.

Because they are so small, the air slows their drop and they fall in a similar way to, say, leaves. A larger fish would fall faster and the survival rate would not be as high.

Aerial drops are also less stressful for the fish. When the fish are transported by ground, it is harder to maintain required oxygen levels in small tanks.

Many of the high-mountain lakes in Utah are not particularly close to a road or highway. Thus, the fish are packed into a tank that isn’t as conducive for survival for miles/hours.

By dropping aerially, the fish spend less time in a tank, and the tank is a bit bigger. Survival rate by air is about 95%, according to Utah’s Division of Wildlife Resources.

Here is a good glimpse into how it all goes down:

Back in the old days, fish were loaded into milk cans and carried out to lakes by horse. Needless to say, the stocking fish process has come a long way.