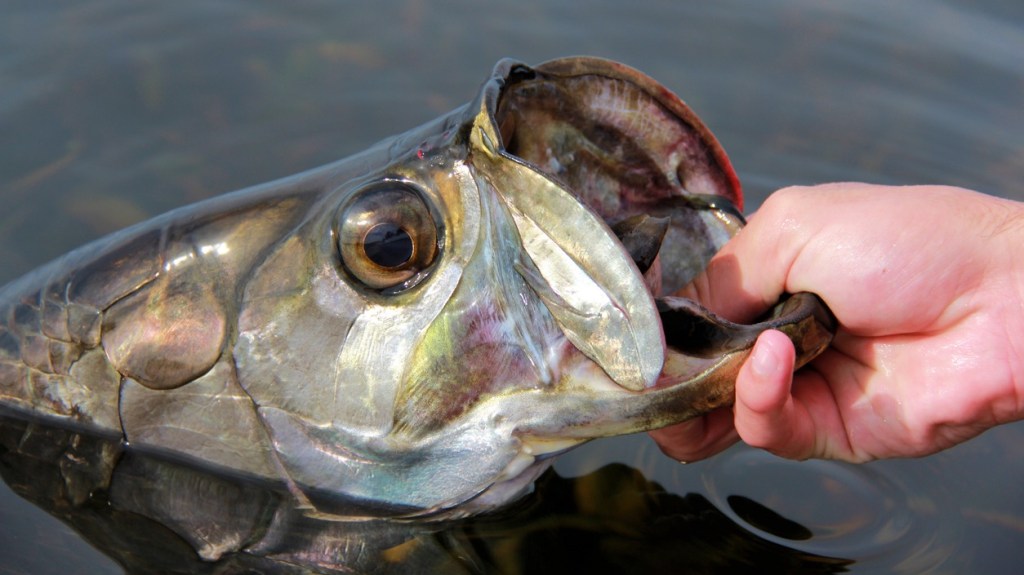 Tarpon aka the ‘Silver King’ is one of the most sought-after game fish in the state of Florida. They can also be caught all throughout the Caribbean, Gulf of Mexico, in the Atlantic up to North Carolina during certain times of the year, and all the way southeast to Africa and down into South America.

Tarpon is a saltwater fish but that can be a bit misleading because the juveniles thrive in brackish water. They often seek the refuge of rivers and the backcountry of the Florida Everglades (full of alligators) where there are fewer predators like sharks. The protection of rivers feeding into saltwater allows them to grow to mid-size before seeking open waters as bigger meals.

But in those brackish areas where saltwater meets freshwater creating that characteristic brown water, there are often alligators opportunity looking to eat fish that swims by. Case in point, the video below.

Florida fisherman nearly loses his tarpon to a massive hungry alligator looking for an easy meal.

David Browning was fishing from a small bridge in South Florida where both tarpon and alligators are abundant. Here he had to tap this massive alligator on the head as it went for his fish. Eventually, he was able to land the juvenile tarpon and get it up to the bridge and the video has since gone viral on TikTok:

He did manage to land the juvenile tarpon from the bridge!

For anyone out there who has never caught a juvenile tarpon I HIGHLY recommend it. These are some of the most acrobatic fish around. From the moment they’re hooked they are doing flips in every direction.

A good place to start is in Everglades City with Capt. Jimmy who runs Everglades Fishing Co. I’ve been fishing with him multiple times out of Everglades City and he knows that area as good as or better than anyone as a 4th or 5th generation Floridian. He’ll put you on those fish in the backcountry mangrove tunnels in no time at all.

Or, you can take the approach of this guy David Browning in the video above and just look for some ‘fishy’ water and hope you don’t get rushed by a massive (hungry) alligator.