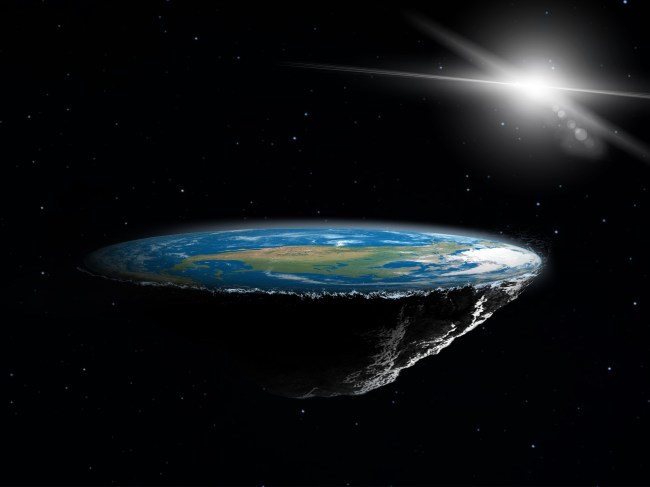 While most flat-Earthers are posting insane conspiracy theories that the Earth isn’t round because the horizon is flat and buying shirts with a gargantuan turtle slowly swimming through space carrying four enormous elephants with a disc Earth on their backs (Great A’Tuin), “Mad” Mike Hughes was out there attempting to prove that the Earth is flat with real actions. Unfortunately for Mad Mike, his curiosity got the best of him.

Sadly, “Mad” Mike Hughes died on Saturday in an unfortunate rocket crash in the Barstow, California desert. The flat-Earther turned rocket scientist daredevil passed away at the age of 64 when his homemade rocketship suffered a malfunction.

Mike, who was previously a limo driver, taught himself how to build rockets. His original goal was to make a rocket powerful enough to launch him high enough in the air to prove that the Earth was flat.

In 2013, Hughes started making steam-powered rockets out of mobile homes. His first manned rocket launch happened on January 30, 2014, in Winkelman, Arizona. Hughes and the rocket flew 1,374-feet into the air before crashing back to the Earth.

In 2018, Mad Mike launched another one of his rockets over the Mojave Desert near Amboy, California. Hughes reached an altitude of 1,875 feet and a speed of 350 mph. The prolific flat-Earther was forced to deploy two parachutes because the aircraft was falling at such a dangerous velocity. The rocket crashed in the desert, and the nose of the rocket broke off.

The Flat Earth Rocket Man survived the rough landing, but gave a dire prediction for himself.

“I manned up and did it. This thing wants to kill you 10 different ways. This thing will kill you in a heartbeat,” Hughes said. Unfortunately, Hughes was right and in his latest quest to prove that the Earth is flat, the rocket did kill him.

Sitting in his rocketship with the words “RESEARCH FLAT EARTH” on it, the aircraft blasted off. But immediately after takeoff, the ship’s parachutes prematurely deployed. With no parachutes to slow his free-fall back to Earth from several hundred feet, the rocket slammed into the desert ground at high speed. Hughes died on impact.

Michael 'Mad Mike' Hughes tragically passed away today during an attempt to launch his homemade rocket. Our thoughts & prayers go out to his family & friends during this difficult time. It was always his dream to do this launch & Science Channel was there to chronicle his journey pic.twitter.com/GxwjpVf2md

In a 2018 interview with VICE, Hughes acknowledged that his plight to prove the Earth is flat was dangerous.

“When I’m walking up the ramp, and I’m thinking: Am I walking up to the gallows where I am going to hang myself? That goes through your mind. I was asking myself if this was the last thing I was going to do,” Hughes said. “I’m a real guy. I put on my big boy pants and I man up and I do things and I will roll the dice. Very few people will roll the dice with their lives. I play Russian roulette.”

Mad Mike appeared on Tosh.0 and was interviewed during the comedy show’s “CeWEBrity Profile.” Mad Mike admitted that his rocket experiments couldn’t prove that the Earth was flat.

“I never said I was gonna try to prove the Earth was flat at 1,800 feet, I mean that’s goofy, that’s goofy in even my book. It was just supposed to raise awareness to get me to space to prove what shape this planet really is. I believe it is stationary, motionless, and I believe it is flattened.”

Sadly, Mad Mike found it necessary to build a DIY rocket ship instead of buying a weather balloon and attaching a GoPro to it. The Dry Creek Elementary School in Colorado was able to send a weather balloon into the stratosphere. If you put some money into it and you can get some outstanding footage showing that the Earth is round, without putting yourself in a hazardous homemade rocket. RIP Mad Mike, hope you found the answers you were looking for.