Florida Man Drives Golf Cart Into Walmart, Hits People, Crashes Into A Register, Demands To Speak To A Manager 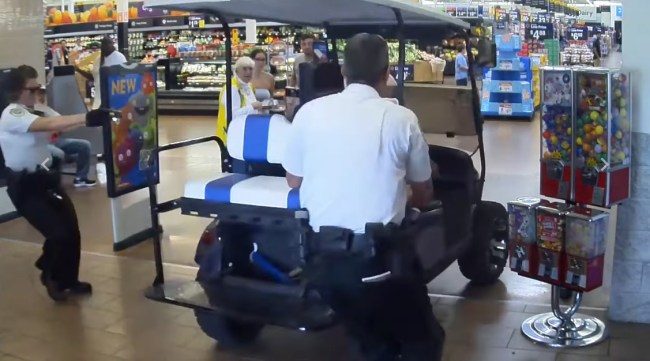 In the annals DGAFitude, you will be hard pressed to find a man who gave less of a f**k than this 56-year-old Florida man who drove his golf cart into a Walmart late last week.

Surveillance video from the Walmart located near Tampa shows customers hurrying to get out the way of the man, Michael Dale Hudson, as he entered the store in his golf cart, then rolling past a couple of security personnel, one with what appears to be her taser drawn.

According to the Tampa Bay Times…

He ignored deputies’ orders to stop, the agency said, as he drove through the glass front doors and entered the store. He entered the checkout area, struck several patrons and caused many others to jump out of his way, the Sheriff’s Office said.

Then he crashed into a register, which is where deputies took him into custody.

A few shoppers were injured but treated at the scene by paramedics. They were not taken to a hospital, according to the Sheriff’s Office.

Oh yeah, he also demanded to speak to a manager, because WTFlorida.

Hudson was taken to Tampa General Hospital and will be booked into the county jail on multiple counts of aggravated battery/aggravated assault with a motor vehicle and charges of trespassing after warning, resisting arrest without violence and felony criminal mischief.